It’s been really rough being a Metroid fan. It’s been over seven years since the last mainline game in the series came out, Metroid: Other M. That game is, in my opinion, not very good, making it around ten years since the last game in the series that I really enjoyed came out, Metroid Prime 3: Corruption. Last year, we had a spin-off game, Metroid Prime: Federation Force, a game that is not the disaster that the internet would have you believe it is, but is absolutely not the game we had waited so long for.

Federation Force failed to sell, which many felt was the final nail in Metroid’s coffin. With that in mind, it was a huge surprise at E3 this year that Nintendo announced two new games in the series. During their Digital Event, Nintendo revealed Metroid Prime 4 for the Nintendo Switch, and then after the show, they announced a remake of the second game, now called Metroid: Samus Returns for the 3DS. Even crazier, that 3DS game was only a few months away from release.

It was easy to be a little skeptical about Samus Returns when we first heard about it. Why were they putting it out only on the 3DS instead of Nintendo’s shiny new console? And why did they choose MercurySteam to a make the game? While they’re not a bad developer, their only other 2D game is Castlevania: Lords of Shadow- Mirror of Fate, a game that is largely disliked by fans of the series. Thankfully, these worries were all for nothing. Samus Returns is a fantastic game.

Taking place right after the original Metroid on the NES, Samus has been tasked by the Galactic Federation to go to the Metroid home world of SR388 and wipe out the species. Apparently they’re just too big of a threat to ever let fall into the wrong hands again. So, that’s what you do. You go to the planet and you hunt down and destroy all those pesky space jellyfish.

Like most games in the series, you spend your time running around maze like caves, finding doors that you can’t open yet, and finding power-ups that eventually let you open those doors. Thankfully, the map does a great job of showing what rooms you’ve been in and which ones you haven’t, so you don’t have to remember too much.

The actual progression through the game is a little bit different from previous games too. In the older ones, you’d often find yourself traveling between the different zones, completing part of one, finding the entrance to another, finding a power-up in that second, and maybe returning to the first. There’s nothing like that here. Instead, each area has a Chozo statue that you need to give a certain amount of Metroid DNA to in order to open the way to the next area. Getting the DNA is as simple as finding the Metroids and killing them. While there are some upgrades you can get for backtracking, once you leave one area, you’re never required to go back to a previous one. 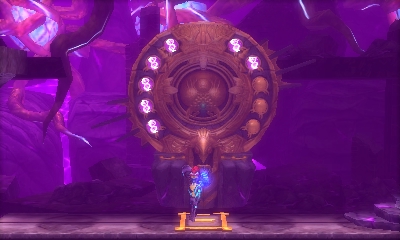 Along with exploring, you spend most of the game in combat. This game introduced a melee counterattack to try to shake things up. At first I wasn’t very impressed with it. Almost every enemy will flash before attacking you, indicating that it’s time to counter. Once you’ve punched them, they’re weak and can be quickly taken out. It didn’t feel any harder than just shooting enemies, and thus just seemed like an extra step for the sake of having an extra step. As I got further in and they started to introduce harder enemies, I grew to appreciate it a little more. It’s not perfect, but it’s a welcome addition to the series.

That melee counter is especially great during the fights against the Metroids. These fights are much harder, and most of the attacks that get thrown at you can’t be countered. Instead, you’ll be doing your best to dodge attacks and shoot weak spots most of the fight, but always you’ll always keep an eye out for the enemy to flash. If they do, get the counter read, because if you can land it, you’ll deal a ton of damage and make ending the fight that much easier.

The Metroid series has always had amazing boss fights, but this one kind of falls flat in that regard. There are a few standout ones, but most of them are against the various forms of Metroids. The first time you fight a new form is exciting, you don’t know how to deal with just yet and figuring it out is a lot of fun. Once you have it down though, having to do it several more times when you come across the same type of Metroid again and again isn’t particularly interesting.

As the series got older, it started to hold your hand a little too much. It started in Metroid Prime, where when you didn’t make progress for a while, it would slap an indicator on your map telling you where to go. Later, Metroid Fusion would just always tell you where you were going next, destroying the sense of exploration in the process. Samus Returns seems to be the best implementation of hand holding so far. For the most part, it doesn’t hold your hand. However, if you just can’t figure out where the next Metroid is, you can cash in your DNA early, and you’ll get an indicator of the approximate area of where it is. If you don’t want to engage with that, you’ll never see an indicator on your map. But if you need a hint, it’s there for you.

I never owned a copy of Metroid II, so any direct homages to that game were kind of lost on me. However, the music in the game seems to be paying its respects to the third game in the series, Super Metroid. I don’t always play 3DS games with the sound all the way up, so it took me a little bit to notice, but a lot of songs are remixes of the SNES game’s soundtrack. After noticing that, the volume went all the way up, and I strongly recommend that if you’re a fan of old Metroid games, you do the same.

Metroid: Samus Returns isn’t perfect, but it’s a strong return to form for a series that’s been terribly neglected over the years. If you’ve ever been a fan of the series, this is not one to skip. Would I have liked to see it in HD on the Switch? Sure. But that’s not enough of a reason to skip out on such a great game.