When Grabbed by the Ghoulies first released it was not very well liked, and it’s pretty easy to see why. This was the first game that Rare put out on a Microsoft console after being bought by the company, so immediately there were some angry Nintendo fans that didn’t want anything to do with it. Add on the fact that unlike the last several Rare games, this was a pretty small and basic game but was still full price, and you get a recipe for disappointment. However, looking at it now, the game does have some things that make it worth checking out.

The game’s story is told through little animated comic book pages, which is fairly cool. The animations all look pretty simple though and absolutely could have been better if they had taken advantage of the Xbox more. By comparison, Rare’s previous game, Star Fox Adventures on the GameCube looked stunning despite being on weaker hardware than the Xbox. But this look is still charming. Instead of full voice acting, they characters let out little grunts, similar to Banjo-Kazooie. It’s a little annoying, but it gets the job done.

The game opens with our main character Cooper and his girlfriend Amber out walking and getting caught in a storm. It’s not clear where they’re trying to get to, but apparently they made a wrong turn somewhere. Amber notices a creepy mansion and thinks that it would be a good place to stop. Cooper points out a sign that says there’s a town nearby, but before they can do anything, the mansion’s owner, Baron von Ghoul, sends gargoyles to capture Amber and “add her to his collection”. Now, Cooper must find her and get out.

Along the way, you’ll meet characters who will help you out, including the mansion’s butler, Crivens. It’s not real clear why the mansion’s staff are helping you, but whatever. Crivens teaches you the basics of combat and instructs you on where to go next. 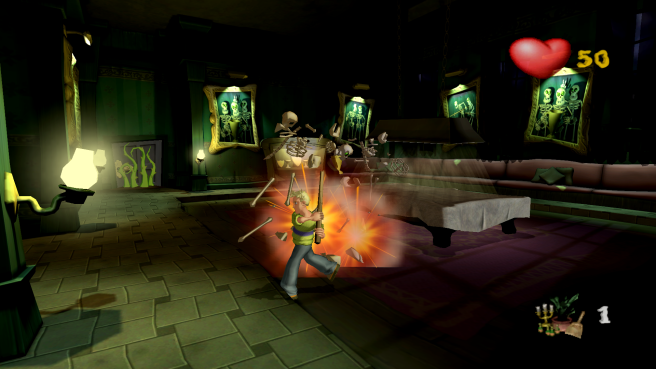 The bulk of the game is spent fighting to meet certain criteria to advance to different rooms. You might have to defeat all the enemies in the room before the door opens. Other times, you might have to search for a key that’s been hidden in an object in the room. This room-to-room gameplay is fast and fun, but it feels pretty “video gamey”. That’s not always a bad thing, but it feels a little weird here.

The actual fighting is handled with the right analogue stick. Simply point your stick in the direction you want to fight, and Cooper will start swinging. You need to make sure you’re in range before attacking, or you’ll find yourself open to attacks yourself. There’s also plenty of weapons found about, like potted plants or pool cues. These are more powerful than your fists, but they have a limited number of uses before breaking.

Every once in a while, you’ll find a long corridor with animal heads hanging from the walls. During these parts, you move automatically and in first person. Most of the heads you’ll walk right past, but sometimes they’ll spring to life and scare you. All you need to do is hit a series of buttons that appears on screen and you’ll be okay. These parts aren’t very interesting and feel like they were just thrown in to add a little bit more variety.

The Xbox One version of the game looks great. Everything is super clean and has a nice cartoony look to it. While it doesn’t look like a modern game by any stretch, it looks much better than you expect from the original Xbox. The music is great too. It’s composed by Grant Kirkhope, famous for Banjo-Kazooie’s soundtrack, as well as recent games like Yooka-Laylee and Mario + Rabbids Kingdom Battle. He manages to capture the mood perfectly, with a lighthearted but still spooky tone.

Grabbed by the Ghoulies was not the smash hit that I’m sure Microsoft wanted when they first bought Rare. It’s also not a reason to run out and buy Rare Replay right away. That being said, if you have Rare Replay, take a look at the game. It does some pretty neat stuff and stands out as really unique.