Would you believe I beat Dragon Age: Origins all the way back in May? I beat it in time to get this episode up on schedule. Unfortunately, sometimes it can be hard to get yourself to write something, even when you want to. And then you find yourself months later, overtired and not feeling well, but really wanting to finish it up so you can move on to the next thing. So that’s what’s happening. At this point, I barely remember what happened, and when you combine that with the other things I mentioned, you end up with something that probably will be barely coherent. But here we go anyway. One last time, let’s go over a couple numbers. Ivan Ooze finished the game at level 19. and I played about 28 hours.

If you can remember all the way back to the previous post, we were just about to head off to kill the Archdemon and end the blight. Before heading out, however, that old Grey Warden we saved last time told us the real reason that Wardens must consume Darkspawn blood. Turns out, when you kill an Archdemon, it’s essence possesses the nearest Darkspawn to turn it into the next Archdemon, essentially making it immortal. If a Grey Warden kills it, having that Darkspawn blood inside them causes the Archdemon essence to enter the Warden instead, killing both.

So that kinda sucks. I was really hoping to survive this whole mess. Thankfully, Morrigan meets with me with another idea. She knows of some super secret blood magic ritual that will allow me, or whatever other warden delivers the killing blow, to survive. Basically, I need to have sex with her, yet again.

This time, having sex with her should impregnate her. Why she has a higher chance of that happening this time than she did all the other times we had sex, I have no idea. But, the child I put in her belly will contain the Darkspawn taint. Using her ritual, she’ll be able to direct the Archdemon essence into the baby. This will keep us all alive, and somehow results in some kind of god baby, instead of a baby Archdemon.

Sounds great to me. Morrigan and I have sex one last time. If I remember right, we decide not to tell anyone about this weird plan of ours. Don’t know how anyone would react to the use of blood magic or the god baby or any of that nonsense. In the morning, we head out for Denerim. 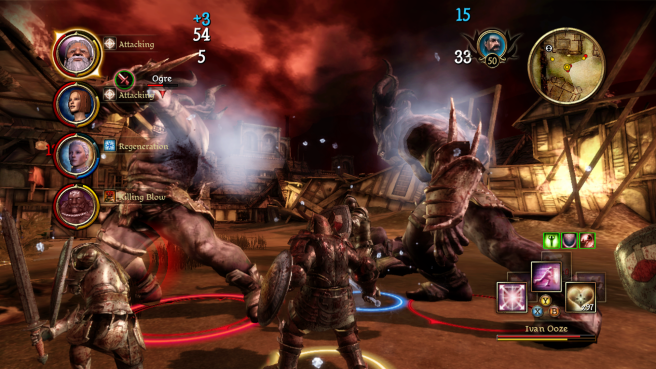 What follows is a whole lot of fighting. Like, way too much fighting. We fight our way through the streets of Denerim, through the markets, and outside the palace. Eventually we make our way to For Drakon, where the Archdemon is chilling. At some point, that old Grey Warden tries to kill the dragon and gets killed himself. That’s a real shame, he was my favorite. That’s why I remember his name so well.

Tons more fighting happens. What’s kinda cool, however, is that you can call in support from the various groups that chose to help you. So if you’re in a situation where more magic users might be needed, call on the Circle Magi to come lend you a hand. You have a limited number that you can use though, so you should probably be careful. I wasn’t, and most of my followers ended up dying.

After much more fighting and stair climbing, we hit the top of Fort Drakon. It’s time to kill the Archdemon. What follows is a pretty typical Dragon Age boss fight. You hit him for a while, he flies around, lands you hit him some more. Eventually, he flies far off and shoots fire at you while Darkspawn attack. You can shoot a ballista at him, which deals a good amount of damage, or you can just wait for him to get back into the old cycle. It’s more drawn out than usual, but it’s still what you’ve come to expect.

Ivan Ooze lands the killing blow on the dragon. The essence goes to Morrigan’s baby and the Darkspawn are defeated. Then we have a ceremony where everyone celebrates our victory. Morrigan isn’t there, as she ran off to raise a god baby somewhere. I give my party members mixed messages, telling some I’m going to stay and help Allistair, others I tell I’m going back to my home and rule it as the rightful heir, and others I tell I’m going after Morrigan. I’m not real sure why I did that, but I did.

Also, Sten complains that there isn’t any cake by saying “the cake is a lie”, which only serves to severely date the game, cause me to grown, and hate the world a little bit.

So, that’s it. That’s Dragon Age: Origins. I hope you enjoyed this trip through the game with me. I had fun with it, even though I believe the gameplay hasn’t aged very well at all. Now, if they’ll just add Dragon Age II to Xbox One backwards compatibility, maybe we can continue this story another time.