It’s weird to think that Mario Kart 8 is already a three year old game. It really doesn’t feel like that long ago that I bought the game and obsessively played through every grand prix on every difficulty until I had a three star ranking on each one. Now Nintendo has put the game back out on their new Switch platform. Does the game still hold up after three years? And more importantly, is it worth double-dipping?

Despite being an older game, Mario Kart 8 Deluxe still looks fantastic. At the time of the Wii U game’s release, it looked borderline impossible. Here was this game on an under-powered console that genuinely looked better than most games on competitors’ machines at the time. This says a lot about Nintendo understanding how to take advantage of their own hardware, as well as the strength of their art style. Deluxe looks just as good as the original release. 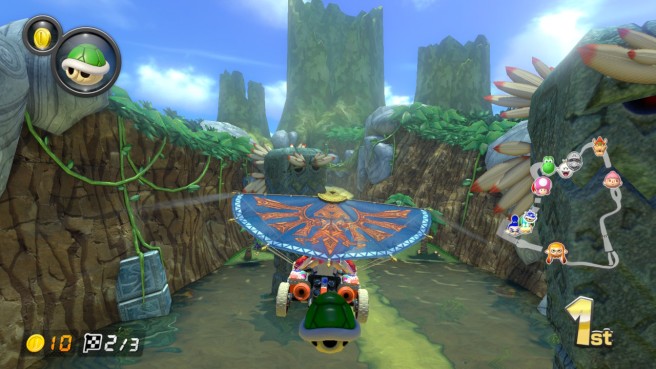 You probably aren’t playing Mario Kart for the graphics, however. Thankfully, Mario Kart 8 is also a ton of fun. For all intents and purposes, it’s still the same old Mario Kart we’ve been playing since the Super Nintendo. You pick a classic Mario character and race around a colorful track, picking up items to help you out or hurt others. The games have become a little more complicated in recent iterations, with things like choosing specific karts and wheels that have different stats, but regardless, you can just pick up the game and have a good time without really worrying about that stuff.

At the time of its release, Mario Kart 8 had thirty-two tracks, split up between eight grands prix. Sixteen of those tracks were brand new, while the other half were remakes of tracks from previous games. Later, sixteen more tracks were added via DLC. All of those tracks are included in Deluxe. This gives Deluxe the most tracks of any Mario Kart game to date without having to purchase additional content.

Everything I’ve mentioned so far was already available on the Wii U, so what’s in it for people who already bought the game the first time around? The big new thing is Battle Mode. Battle Mode has been a huge part of the series for as long as it’s been around, but the mode included with the original version of 8 was, honestly, pretty terrible. Unlike past games, Mario Kart 8 didn’t include maps specifically made for the Battle Mode, using racing tracks instead. This meant that every match took place on basically a big circle, and finding your opponents was much more difficult than it should be.

Speaking of online, while I haven’t spent a whole lot of time with it yet, it’s simple and straight-forward. Simply select “Online” from the menu, choose if you want to race or battle, and then the game will find a match for you. I haven’t tried to connect with friends yet, so I can’t say for sure how well that works, but there is a menu for making a private room for your friends.

Once you find a match, you’ll likely have to spectate until the end of a round so that there’s an opening for you to jump in. From there, every player can vote on one of three courses to play, or choose random. Once that’s out of the way, the game picks one and you start your race or battle. It’s quick and easy, and that’s the way I like it.

There are a couple things to complain about when playing online, however. Typical server lag causes some weird issues to pop up. During one race, I saw an opponent drive right off the edge of a cliff, only to reappear immediately after directly in front of me. In battle mode, I’ve had enemies I was chasing down just mysteriously vanish right in front of my eyes. This isn’t a game breaker, and it doesn’t happen that often, but it is noticeable. My other big issue is that you can’t choose what game type you’re playing when in Battle Mode, unless I’m just missing something. Earlier today, I really wanted to play some Balloon Battle, but ended up playing Coin Rush instead, because that’s what’s available.

Overall, I’m very happy with Mario Kart 8 Deluxe. Yes, a lot of it is stuff I have already played. However, I feel there’s enough new here to justify buying the game again. Also, being able to take the game on the go is fantastic. With how few people actually bought a Wii U, I think re-releasing the better Wii U games on the Switch is a great idea. If you have a Switch, this is an absolute must buy.