It seems like any time I hear Joe and Mac brought up, whether on YouTube videos or conversations about old games, it’s always the Super Nintendo version that’s being talked about. I grew up with the NES version. It’s been a long time since I last played this game, but I remember it being fun but very challenging. Let’s see how it holds up today.

Joe and Mac is a 2D action-platformer where you play as Joe the caveman (or Mac if you’re player 2) and beat up a bunch of other cavemen and dinosaurs on a quest to retrieve some women who were kidnapped by those other cavemen. It’s not the most inspired plot, but you know, it’s an old video game.

The NES version of Joe and Mac came out in 1992, a year after the SNES had already hit store shelves. Like a lot of late NES games, Joe and Mac looks great. The backgrounds are colorful and offer the illusion of depth by having things further in the distance scroll by slower than things closer to the player. Enemy sprites are well detailed, especially the bosses. There’s even some hills that as you begin to descend reveal themselves to be dinosaurs.

For the most part, Joe and Mac plays well too. Controls are simple enough, move with the D-pad, jump with A, attack with B. The movement doesn’t feel quite as snappy as some other platformers, like Super Mario Bros. for example, but it works well enough and I never felt like the controls were getting in the way of me progressing.

What did get in the way were the enemies, especially the bosses. While running through a level, you’ll constantly get bombarded by a seemingly endless supply of pterodactyls and cavemen. Eventually I learned that the best course of action is just keep moving forward, but I still got hit more than was really necessary. And then I hit the first boss, who I feel is almost impossible to fight normally. He’s a T-Rex who runs at you from the left side of the screen and spits rocks or something at you. He just advances too quickly to be able to actually fight. I did figure out that if you stand close to him and just throw your weapon into the air over and over and over again, he’ll get hit pretty regularly and struggle to hit you. I doubt that was the intended method of defeating him though.

While playing the game for this post, I made it to two other bosses. The first was another T-Rex, but this one was so large that you only saw his head and upper body. I actually really like this fight. It was difficult, but there was a clear pattern that you could follow to avoid attacks while getting some in yourself. The third boss was a giant plant, like the one from Little Shop of Horrors. I remember beating him one time as a kid, but I have no idea how. He constantly spits out smaller plants that attack you, and if you get to close to him, he’ll eat you which instantly kills you. This fight is awful. 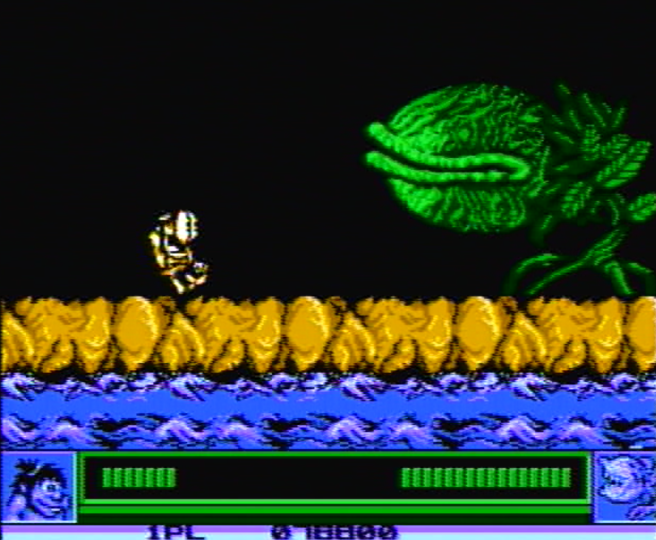 I want to give Joe and Mac for the NES my full recommendation, because it really does have a lot going for it. It looks great and controls well. I didn’t even mention the weapons, such as a wheel that can roll along the environment to hit distant enemies, that really give the game a unique feel. But unfortunately, the boss fights just feel way to hard, especially that plant one.  If you’re up for a challenge, give this game a try. But know going in that the game doesn’t play fair.