I consider myself to be pretty knowledgeable about video games, but every once in a while I come across a game that I’ve never heard of before. I’m almost embarrassed to admit that Star Soldier is one of those games. When the random number generator gave me this game, I honestly didn’t even know what genre it was. Turns out it’s part of a long running series, one that’s had sequels, re-releases, and remakes going all the way until 2013. But yeah, I had no idea what this was.The cover art is woefully generic and doesn’t do much to tell me what to expect. There’s a space ship shooting at other ships, but the main focus is on some dude in a white shirt holding a pistol. If I was asked to guess what kind of game this was, I would guess a sci-fi themed action platformer. Maybe something like Mega Man? But as it turns out, the space ships in the background were the bigger hint. Star Soldier is a top-down arcade shooter.

Like a lot of NES games from this genre, Star Soldier is pretty difficult. It doesn’t hit “bullet hell” levels of difficulty, but it does have one-hit deaths and enemies pop up right in front of you pretty often. Thankfully, there are power-ups to make life a little bit easier on you. These include allowing you to hold down the A or B button to rapidly fire as well as the ability to shoot behind you. But, of course, if you die, you’ll go back to the default weapon.

The enemies you fight are kind of strange. There’s typical space ships, but also what appears to be snails that just kind of show up and spin around. There’s one enemy that starts in four chunks before forming together into a face. Weirdly, when that face thing kills you and knocks you back to your checkpoint, you’ll no longer encounter it. I have no idea why that is.

At the end of a stage, you’ll encounter a boss and a message that says “Attack the Star Brain”. I don’t know what a Star Brain is, or why I’m attacking it, but once you kill it you can move on to the next level. Interestingly though, if you don’t kill it fast enough, it’ll run away and you’ll get a message that says “Star Brain Escaped”. You’ll then be launched backwards to the start of the level. While Star Solider mostly seems like a pretty typical arcade-shooter, the added stress of having to defeat bosses as fast as possible really helps set it apart.

As you may have noticed from the last time I wrote about a game like this, I’m not very good at them. While playing today, I only made it to the second stage, and didn’t get to the end of that stage. So, I have no idea if every level ends with a Star Brain. I think it’s a pretty safe assumption though. 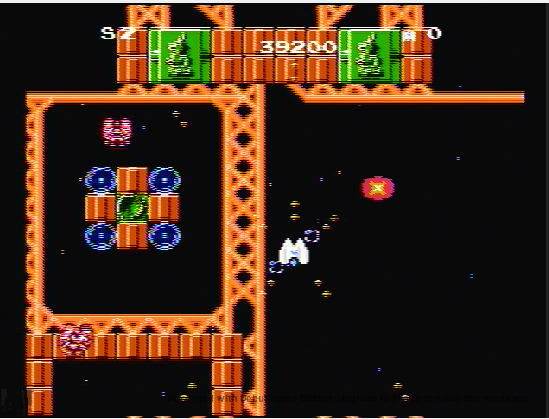 Unfortunately, I don’t have much else to say about the game. If you’re into arcade-shooters, this seems like a good one. If you’re like me, and enjoy them but are very bad at them, it’s worth checking out if you get the opportunity, but I wouldn’t suggest going to eBay and hunting down a copy right now. I’m kind of curious how the later entries in the series are, and whether or not they managed to find an identity beyond just “a pretty good arcade-shooter”.