Sometimes, games come out that are very difficult to describe. Maybe they’re overly complicated or maybe their objectives are just hard to put into words. And then there’s other times when you can describe the whole thing in a single sentence and then have to try to write a decently long entry anyway. Hey You, Pikachu is a game where you talk to Pikachu. That’s about it. You start the game in your bedroom. Your mom, who isn’t modeled and only appears as a portrait in dialogue boxes, tells you that you have a test with Professor Oak, the Professor from the first generation of Pokemon games. There’s not really any indication of what that test involves or why you have to do it, but you’re sent out into the Viridian Forest to get started.

Once you’re there, you meet a Pikachu. Professor Oak instructs you to talk to it. To do this, you use a special microphone that’s plugged into the fourth controller port of the Nintendo 64. I was honestly a little worried about whether or not it work, since it’s an old mic that I hadn’t used in at least 15 years. To my surprise, it worked out just fine, and Pikachu reacted to me calling out to him.

The game itself revolves around you talking to Pikachu and accomplishing different tasks. Most of the time I spent with the game today was just kind of goofing off, but I did reach a point where I had to actually do something. Pikachu and I met a Bulbasaur who was preparing a stew for a picnic. This is super weird since the mainline Pokemon games treat Pokemon like they were animals, including Pokedex entries on how they hunt and eat each other. They don’t cook vegetable stew. But whatever. Bulbasaur sends us off to play in the woods while he prepares his stew. 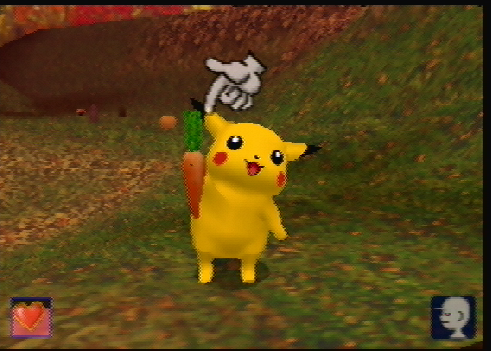 Even though the game specifically said that we were to just go play, it turns out that we need to gather ingredients for the stew. Before we left, Bulbasaur showed Pikachu an onion, a carrot, and some kind of leaf. Out in the woods, Pikachu ran around gathering up different ingrediants, and then I had to tell him if those ingrediants were okay or not. If they were, a Magnamite would swoop in and take them to Bulbasaur. I gathered up an onion, a carrot, and some kind of leaf. But when it came time to eat, it turned out that Bulbasaur made some kind of mystery soup. A Charmander joined us to eat it, and he clearly didn’t like it and started thrashing about. Pikachu shot into the air and bellyflopped into the ground. Professor Oak then tells me that I didn’t get the right amount of ingrediants. Well, how was I supposed to know? The game did nothing to tell me what it was I was supposed to be doing.

While the game hasn’t been much fun to play, it does look very good. Pikachu and the other Pokemon are well detailed, looking very similar to the other Nintendo 64 Pokemon games. Pikachu in particular animates really well, even making “peace signs” with individual fingers, something that was not very common on the N64. The forest and the bedroom settings all look very nice too. A lot of N64 games use 2D visuals that look fairly 3D to allow for greater detail while not  taxing the system too much. I really didn’t notice that happening here. All the vegetables that Pikachu interacted with and all the foliage all looked like it was actually rendered in 3D.

Hey You, Pikachu is a weird game, and not one that I can really wholeheartedly recommend. It is a cool novelty though. Directly interacting with your Pokemon is something that people have wanted to do since the beginning of the franchise. Unfortunately, the actual act of playing isn’t overly satisfying. It’s very simple in concept, however important details like what you’re supposed to do to accomplish your goals are kept very vague. If you like Pokemon, it’s worth looking at, but don’t go out of your way for it and don’t expect anything too amazing. 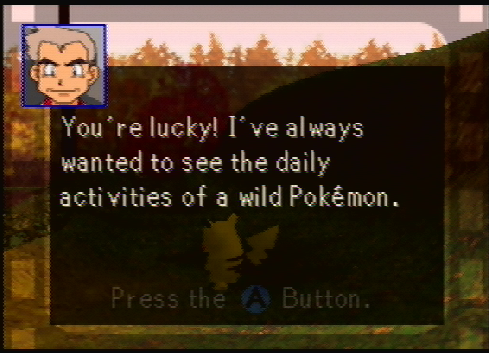