Tokyo Mirage Sessions is a weird game. At it’s core, it’s a fairly standard JRPG, with turn-based combat and level-ups and all of that. Similar to the Persona series, it takes place in modern-day Japan, rather than the fantasy settings that genre is usually associated with. Unlike Persona though, it doesn’t follow the school life of it’s characters, focusing instead on more supernatural stuff as well as the characters becoming teen idols.

Because this game is pretty different from the last game I did this kind of weekly series on, Xenoblade Chronicles X, this series might end up different from that one. It’s a lot more linear, so it doesn’t really serve itself to the same kind of random “this is what I got up to this week” stuff that Xenoblade did. As a result, I think this series will probably end up being more story focused. But, I’ll still start it the same way I always did with the last series. Let’s go over some numbers. My main character, Itsuki, is level 17, I’ve played for 7 hours and 15 minutes, and I’m currently part way through chapter 2.

The game begins with an anime cutscene that takes place in an opera. In the middle of the performance, a bright light flashes and suddenly everyone vanishes except for one young girl in the audience. Flash forward five years and we’re introduced to our main character, Itsuki Aoi. He was going to hand out with his friends Tsubasa and Touma, but Tsubasa was busy and Touma just texted him saying he’s running late. So, Itsuki’s on his own for a little while. 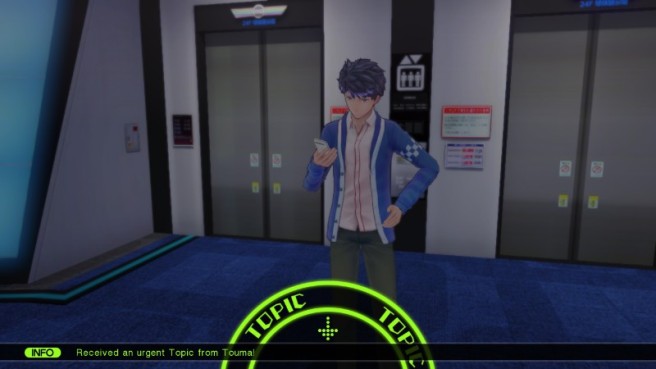 Itsuki just kind of stumbles into the One of Millennium talent contest, where he runs into Tsubasa. Tsubasa’s pretty coy about why she was there, but once a voice over the PA system calls for contestants to come to the stage, she runs off. Itsuki, who still has nothing to do, wanders to the stage to see what all the commotion is about. Shortly after, the host calls Tsubasa to the stage. Itsuki is pretty surprised to see her on stage, even though it was pretty obvious that’s what she was doing. The host starts asking Tsubasa some questions about why she wants to be an idol. He learns that her sister was the former pop idol, Ayaha Oribe, who disapeared at that opera. He then starts asking some weirdly personal questions about it before suddenly turning kind of demonic looking. Everyone in the audience gets drained of their energy and the host takes Tsubasa through some weird looking door.

Itsuki follows through the door and ends up in a weird alternate dimension, called an Idolosphere. The environment goes from a more realistic take on modern Tokyo to a dark and kind of industrial look. The architecture is borderline nonsensical, with paths winding around for no real reason other than to be confusing. It’s a neat look. 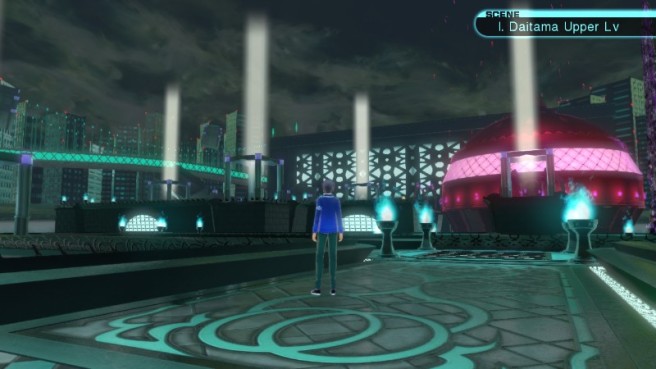 After running around trying to find Tsubasa for a while, you come across a door and hear her voice on the other side. Before you can get in though, a strange human-like monster in a red cloak attacks you. A bright light emerges from Itsuki, which he grabs and shoves it into the monster. I’m not sure why he thought to do that, but it works and the monster transforms into Chrom, a slightly more human looking swordsman. Chrom agrees to help you, and the two of you  go in to save Tsubasa.

Tsubasa is also being attacked by a monster, and a similar bright light comes out of her. Itsuki grabs it and shoves it into her attacker, revealing Caeda. Chrom and Caeda are mirages. Apparently there’s good and bad mirages? I don’t know, it’s not super clear just yet. Chrom and Caeda transform into weapons, and in a very Power Rangers move, Itsuki and Tsubasa gain battle armor. Now, we’re finally introduced to how combat works in this game.

It’s pretty standard stuff. You take turns choosing attacks or skills. Similar to Final Fantasy X, there’s a list at the top of the screen that shows the attack order, allowing you to strategically attack enemies in an order that prevents you from getting attacked. What makes things interesting is that some attacks can link into each other. If you use a skill that a particular enemy is weak against, and another party member has a skill that can link off it, you end up getting a combo. These are called sessions. 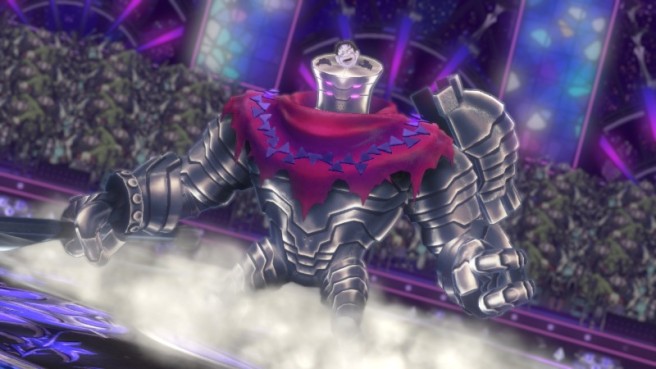 After some combat, you encounter the host from the talent show. He’s been possessed by a mirage, and he transforms into a large monster. Before you can fight him though, Touma shows up. He has a mirage of his own, Cain, and apparently already knew about all of this stuff. The three of you make short work of host, and then start to leave the Idolosphere. Before you can leave though, a big group of mirages attack, but you’re saved from Kiria, a pop idol who Tsubasa is obsessed with.

After exiting, you meet Maiko, the head of Fortuna Entertainment, a music label. It turns out that Fortuna Entertainment is a front for Mirage Masters, which is apparently what you are. They step in to try to prevent mirage based disasters, like the opera house incident. Maiko asks your characters to join them, and both Itsuki and Tsubasa are all for it.

Maiko sends you to train with Barry Goodman, a former American musician who moved to Japan and is obsessed with anime. He mostly just yells at Tsubasa, even though she’s just beginning to learn. Tsubasa goes home, disappointed in her performance, which is too bad because right after, Itsuki runs into Kiria. She gives Itsuki two tickets to see a concert she’s performing in. Itsuki contacts Tsubasa, and the two of them go to the concert. 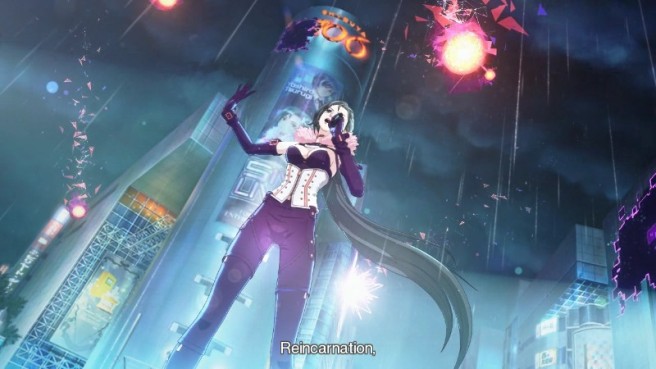 After Kiria’s performence, which was another anime cutscene, another mirage attack happens. The person behind it turns out to be Tsubasa’s sister who is now being controlled by a mirage. Kiria attempts to fight her, but is wounded. So, it’s up to Itsuki, Tsubasa, and Touma to enter the next dungeon and hopefully free Ayaha.

This dungeon’s main gimmick is weirdly large costumes of the upper bodies of a maid, or something. I don’t know. You can position their arms to connect to different levels of the dungeon. It’s weird and sometimes confusing, but nothing too complicated. After working your way to the top, you find Ayaha, but she doesn’t seem to be able to hear anything Tsubasa tries to tell her. The group decides that a song should be able to get through to her.

Your party returns to Fortuna Entertainment, where they enter another door that leads to a place called the Bloom Palace. Here, mirages can freely take form, so you’ll see all the ones in your party just hanging out. Also there is Tiki, who is basically this universe’s version of Hatsune Miku. Apparently, she’s also a mirage and is used to teach you new skills and unlock new weapons. One of the skills she teaches you is the song needed to get through to Ayaha. So with that in your possession, you head back to the dungeon. 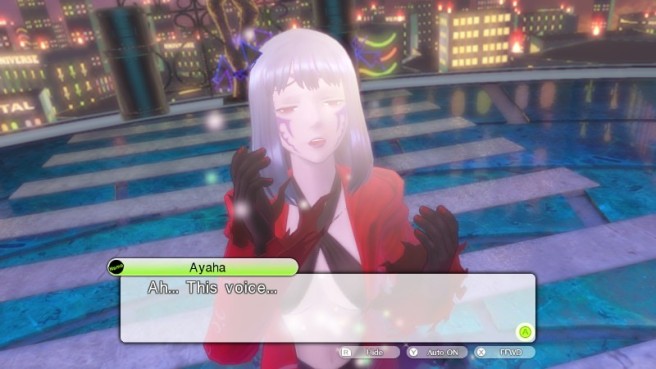 The song is successful, and Ayaha is freed. Now we just have to take on the boss. It’s a pretty standard JRPG fight, and once it’s over, everyone in the area gets their energy back. Life if back to normal, and Ayaha is free after five years. She ends up working a desk job at Fortuna.

And that’s everything through chapter one. I have played some of chapter two, but I think I’ll hold out on that until next week. One thing that I haven’t mentioned yet is how the Gamepad works in the game. When you receive text messages from people, it displays on the Gamepad’s screen. It’s really cool and feels like you’re really getting texts, since you don’t have to go to a new menu or anything. Just look at the device in your hand, and there it is. The Gamepad is also used to display a map, but that’s pretty common stuff. The texting sets this game apart.

So far, I’m really enjoying Tokyo Mirage Sessions. It has a real style and personality to it that is uniquely its own. So, join me here on the blog again next week, and we’ll see where the game takes us next.