It was pretty easy to be skeptical about Pokemon Let’s Go when it was first revealed. Not only was it a remake of the first generation of Pokemon games, which already had a remake, but everything looked like it had been dumbed down to appeal to the crowd who had only played Pokemon Go, rather than fans of the core franchise. Both these things are true, but does that necessarily make it a bad game?

Sometimes a person’s individual experiences can greatly affect how they react to a game, or any form of media. I knew going into Let’s Go that it was intended for beginners. I had been jokingly referring to it as “Baby’s First Pokemon” for as long as we’ve known then game existed. But regardless, I thought like it could be a fun little distraction. What I didn’t know was that I would find myself in one of the most stressful couple of months at work that would completely destroy my desire to much of anything when I got home.

I have a copy of Red Dead Redemption 2 sitting on my shelf that I’ve barely put any time into, despite the fact that it’s constantly being referred to as one of the best games of the year, if not the entire generation. I just didn’t have it in me to play as demanding as it was. As I said before, I didn’t really have it in me to do much of anything, which if you’re a follower of this blog, you probably noticed. There’s been practically no activity on here in a long time. Then along comes Pokemon Let’s Go.

This game is one of the most chill experiences I’ve had in a long time. That’s exactly what I needed. I would get home from work, put some YouTube on the TV, and play Pokemon on my Switch every night, and just not worry about anything. It’s hard to put into words just how much I needed this and how well it worked.

But okay, enough of what’s been going on in my life, what actually is this game? As previously mentioned, Pokemon Let’s Go is the second remake of the first generation of Pokemon games, this time time taking more elements from the Yellow version of the game as well as elements of Pokemon Go. Like Pokemon Yellow, you only get one choice of Pokemon at the beginning, either Eevee or Pikachu depending on which version you get. Like Pokemon Go, the creatures actually appear on the overworld and it’s up to you to engage in catching them, rather than have it be purely random. You also don’t battle wild Pokemon anymore, rather you just feed them berries and throw Poke Balls at them, just like in Go.

This simplified version of catching was definitely something to be worried about, but it ultimately works well. Catching is a lot snappier now, and you no longer have to be concerned with whether or not you might accidentally kill the Pokemon instead of catching it. Catching is easy too. When playing on the TV, you make a throwing motion with the Joycon to throw a ball, which I felt worked just fine. If you’re playing in handheld mode, you aim where you’re throwing with either moving the Switch around or using the left stick, and then just press the A button. Now, I wouldn’t say that I prefer this to the style of the original games or that they should adopt this in the main series, but it worked fine here.

Progression in the game is almost identical to the original games. You get your Pokemon and set out to collect eight badges from eight gyms in order to earn the right to battle in the Pokemon League. Along the way, you run into and thwart Team Rocket, a criminal organization  who steals and uses Pokemon for their own gain. But there’s a lot of neat little touches this time around that I really appreciated.

For one, despite the fact that you and your rival are totally new characters, the rival from the first game, Blue, is around and pops in from time to time. Also, in a few instances throughout the game, I ran into gym leaders just out and about. This went a long way towards making them feel like real characters and not just bosses you fought and then forget about.

There’s a few other changes to try to streamline things a bit. Much like last year’s games, Sun and Moon, Let’s Go has ditched the Hidden Machine system that has plagued Pokemon since the beginning. For the unaware, Hidden Machines, or “HMs”, taught your Pokemon important moves needed to progress, such as chopping down trees or swimming in the water. The problem was that these moves took up one of a Pokemon’s four attacks, meaning that they were less capable fighters. In Let’s Go, your partner Pokemon just learns how to do these things throughout the game and they don’t count as an attack. It’s a really welcome change of pace.

One thing that has thankfully stayed the same, however, is trainer battles. With catching getting simplified, I was worried that battling would be too, but it’s actually exactly how you remember it. Pokemon have up to four moves, all of which have Power Points that get spent when you use them. All Pokemon are assigned one or two types, such as fire, grass, or electric which all have strengths and weaknesses to other types. While I ultimately found the game easier than the original, the depth of the combat is still there.

After completing the main game, there’s still more things to do. Obviously, you can keep trying to catch every Pokemon. Hopefully you have a friend with the other version of the game to give you the Pokemon that are only in the version you don’t have. But there’s also special trainers called Master Trainers that pop up at the end. These trainers specialize in one Pokemon type, which they’ve trained to a very high level. You’re tasked with fighting them with the same Pokemon. So far, I’ve only actually done one of these, but it’s a pretty cool idea and a good reason to keep leveling even after you’ve become the champion.

Pokemon Let’s Go is a good game. I think I would feel that way no matter how life had been at the time of its release. But because of what was going on, it’s one of my favorite of the year. I doubt too many others will praise it as much as I did, but I do think that if you like Pokemon, you have no reason not to check this game out. 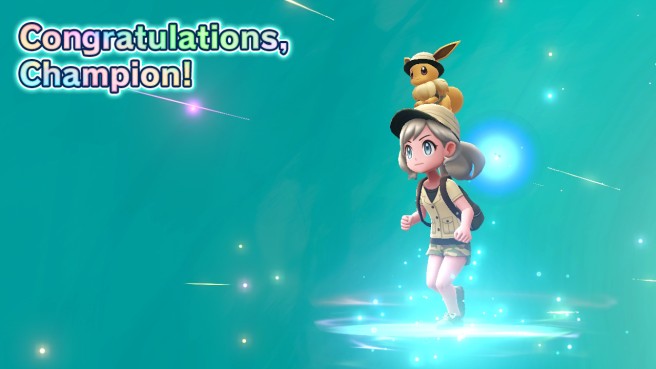