Going back to old games that you haven’t played in years can be kind of a risky thing. As cool as it is to say that the original Legend Of Zelda or Super Mario Bros. is the greatest game of all time, the fact is, games have come a long way since then. What if you go back to a childhood favorite and discover that it’s not all that you remember it to be? I recently managed to get an NES Classic Edition thanks to Nintendo finally putting more of them in stores and decided to check out an old favorite of mine, StarTropics.

I’m honestly kind of surprised that StarTropics was even included on this thing. It certainly has its fans, but it’s not exactly a household name. The game released in December of 1990, less than a year before the SNES came out. But, I actually received my SNES pretty late into its life, so those later NES releases that slipped by many people were very much a part of my childhood. 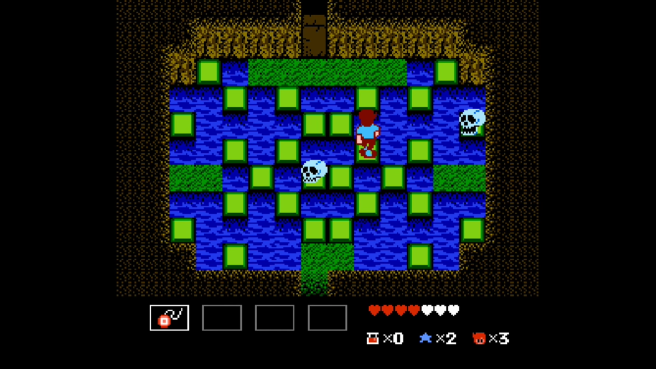 StarTropics clearly takes a lot of its inspiration from The Legend of Zelda. Like that game, you traverse through dungeons from a top down perspective, kill monsters, and solve light puzzles to find your way through the maze. Outside of dungeons, you have a more Final Fantasy overworld style of appearance, complete with towns and NPCs to talk to. It’s actually kind of similar to what Zelda II was doing, but without abandoning what made the original game so great. In a weird way, it kind of feels like a bridge between Adventure Of Link and Link To The Past.

Also like Link To The Past, StarTropics features more of a plot than what you expect from games of this era. You are Mike, a kid who’s been called to C Island to visit his uncle, Steve. When he arrives, he’s informed that his uncle has gone missing, and you are tasked with finding him. You’re given a yo-yo (which is for some reason called a “star” in the NES Classic version, but it was definitely “yo-yo” on the NES) to use a weapon. And you’re told that because you’re in excellent baseball player, you should be able to weird effectively. Sure, why not? 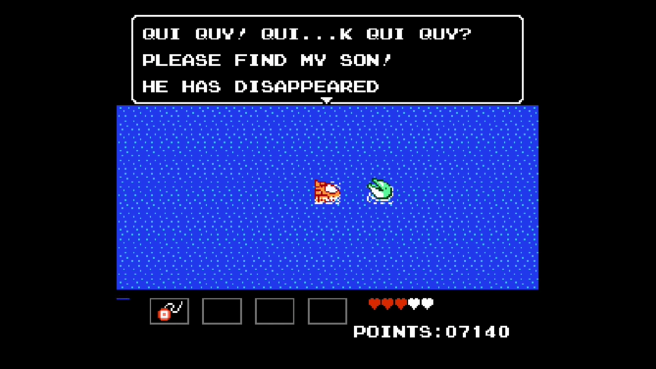 That’s the basic setup, but this story goes places. What starts as just trying to find your lost uncle leads to helping out a family of dolphins, investigating a graveyard to find a fortune teller’s crystal ball, crossdressing to sneak into a women’s only castle, getting swallowed by a whale, and eventually an alien invasion. There’s even a bit that pulls a Metal Gear Solid style fourth wall break, asking you to dunk a letter written by Steve under water to find a secret code. The NES version came with a physical letter that you actually put under water. This version just gives you the solution in the online instruction manual.

I love this game, but it isn’t perfect. The biggest flaw comes out during dungeons. As you get later into the game, progression starts to rely more heavily on hidden passages, where you have to walk through a normal looking wall in order to advance. Some of them are marked with a bit of shading, but some aren’t. Way to often, I found myself just kind of pushing against every wall I came across, hoping to end up walking through them. This kind of design isn’t clever, it’s just annoying. There’s also instant death traps in a couple of dungeons, where you go to a new room only to immediately fall into an unavoidable pit. The Zelda style of gameplay encourages exploring, and you should not be punished for doing it.

Thankfully, that’s my only real complaint with the gameplay. For the most part, StarTropics follows what you you’d expect from a Zelda game but with more active combat. You can jump, which leads to combat encounters where you can leap over a gap and attack your enemy before they can do the same. There’s also no permanent items that you get outside of yo-yo upgrades, which sounds limiting, but it actually allows you to get very good and doing one specific thing. This controls are a little floaty, but otherwise, this is about as good as you can expect from combat in a NES game.

Being such a late NES game benefits StarTropics in the graphics department. While the overworld is a little on the bland side, all the sprites in the dungeons look great. Mike is a lot taller than how Link looks in the first Zelda, and all the enemies are very easy to tell what they’re supposed to be. There’s an enemy that’s basically an ostrich but with a large human skull. It looks incredible and surprisingly detailed. Bosses look great too, with humongous sprites and cool animations.

StarTropics has always been one of my favorite NES games, and I’m happy to report that it holds up wonderfully. It’s my genuine hope that all the people who bought an NES Classic to play the Marios and the Zeldas decide to give that little game they’ve never heard of with tropical island looking boxart a try. What they’ll find is a game that borrows elements from games that they remember, but puts it all together in a way that’s totally original and ahead of its time.