One of my favorite indie games of all time is Dust: An Elysian Tail. One of my favorite AAA games of all time is Metal Gear Solid. With those things in  mind, I was extremely excited when Humble Hearts, developer of Dust, announced that their second game would be a parody of Metal Gear Solid. I was a little skeptical, as it didn’t look anything like their first game, but happily bought it the day it came out.

Never Stop Sneakin’ is a weird game. Essentially, it’s a randomly generated stealth game played from a top down perspective, similarly to Metal Gear Solid. Your goal is simply to get the end of the level without dying, picking up as much points on your way as possible. Sounds pretty simple, right? And truthfully, it is, but as the game goes on, it starts adding more wrinkles to make things interesting. 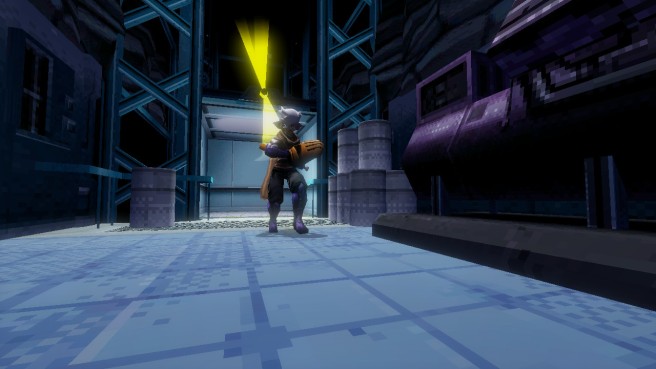 Playing the game couldn’t be easier. Other than some necessary button presses in menus, the entire game is played with just a single analog stick. Killing enemy soldiers is as simple as walking up behind them, causing your character to automatically take them out. Every enemy has a cone of light appearing in front of their face to represent their vision, however. If they spot you before you can kill them, they’ll attack.

Thankfully, there are many pick-ups that can help you deal with being spotted. If you have a bullet, you’ll automatically shoot and kill any soldier who spots you, taking them out before they can alert anyone to your presence. There are also security cameras, which you’ll similarly take out if you happen to have a bullet. You don’t get a whole lot of those bullets, or other defensive items like EMP bombs, though, so you’re still encouraged to be sneaky.

At the end of a level, you’ll get to an elevator and go down a floor, deeper into the enemy base. Early on, your run will end after three of these levels, and you’ll have to fight a boss. The boss fights are a little more elaborate than the basic combat, but not by much. My favorite is Vice President helicopter, who is literally a helicopter. He’ll shoot bullets that cover most of the screen, forcing you to hide behind some cover. Periodically, a rocket launcher will appear. Simply walk over to the weapon and stand in place for a little bit and you’ll fire a rocket, hurting the Vice President. Once again, all of his done with just an analog stick.

As you kill enemies, you’ll earn points which you can spend to get items that’ll help you in your current run, like more bullets, or more importantly, buildings that let you move forward in the game. As you build more buildings in your base, which is basically just a menu you’re in before each mission, you’ll eventually unlock more floors that you can access in the enemy base. It’ll still follow the pattern of every third level, there’s a boss.

To add another layer to the game, some times, your commanding officer, Major Milestone, will give you a specific objective. Usually it’s just finding a piece of tech in the enemy base or liberating a specialist who’d like to help. After you’ve accomplished these tasks, you can choose to end your run there, but I usually did a full run anyway just to get the most points out that I could.

Of course, you can’t make a Metal Gear Solid parody without having a completely ridiculous story. The game’s villain, Amadeus Guildenstern, has used a time machine to kidnap every United States President throughout history, and it’s up to you to get them back. The game features long silly cutscenes, much like the game it’s inspired by, and manages to pull it off well. The voice acting stays perfectly serious despite the complete nonsense in the script. Major Milestone, who’s voiced by Arin Hanson of Game Grumps fame, has some particularly great deliveries.

A lot of indie games choose to look like old 8 and 16 bit games, so the art style of Never Stop Sneakin’ is kind of a breath of fresh air. To take the Metal Gear parody to its fullest potential. the game is designed to look like an original PlayStation game. That means everything is very blocky, and the faces are all static pixels drawn on to the polygons. It looks great, although I’m pretty sure I wouldn’t be as into it if it wasn’t specifically referencing that era of games in a satirical fashion.

Never Stop Sneakin’ isn’t the deepest or hardest game around, but it’s a lot of fun and great in short bursts. If you want something simple but addicting, or if you have a fondness for PlayStation sneaking games, this is the game for you.