It’s pretty rare that Nintendo releases a game that isn’t part of an established franchise. Earlier this year, they put out 1 2 Switch, a minigame collection that I didn’t play, but before that, the last new IP out of Nintendo that I can think of is Splatoon. Despite not being something we were nostalgic for, Splatoon managed to win over fans with its unique take on the third-person shooter as well as its immediately endearing characters and setting. Was that a one time stroke of genius, or can Nintendo prove itself with another brand new world?

Arms was first announced at the reveal event for the Nintendo Switch. At the time, no one really knew what to make of it. This was also when we learned that the Switch would feature motion controls, and Arms was taking full advantage of it. This led to many people believing that Arms was nothing more than the boxing minigame from Wii Sports repackaged with new characters. Boxing was by far my least favorite part of Wii Sports, so I’m happy to say that Arms isn’t that at all.

There’s not a whole lot of story in Arms, but there are a few things we know about the world it takes place in. Apparently, some people will wake up one morning and find that their arms have become very long and coil up like springs. There’s not really an explanation for why this happens, although there is a mysterious organization called “Arms Laboratories” that studies these arms and performs various experiments. One of the fighters, Helix, who is some kind of gelatinous blob man, is one of the results of the experiments. Even weirder, one of the characters, Twintelle, didn’t have her arms effected, but rather her hair. Hopefully, you don’t play games exclusively for the story, because that’s about all you’re getting.

So, what exactly is this game? It’s a fighting game, but not in the tradional sense. There are no complex combos or button combinations to learn. Instead, every character can perform the same basic actions, but they each have a special property that makes them unique. For example, my favorite character to play as, Ribbon Girl, can jump up to four times before landing, instead of a single jump that most characters can do. Learning each characters unique traits and figuring out which ones work best for you personally are a big part of playing the game. 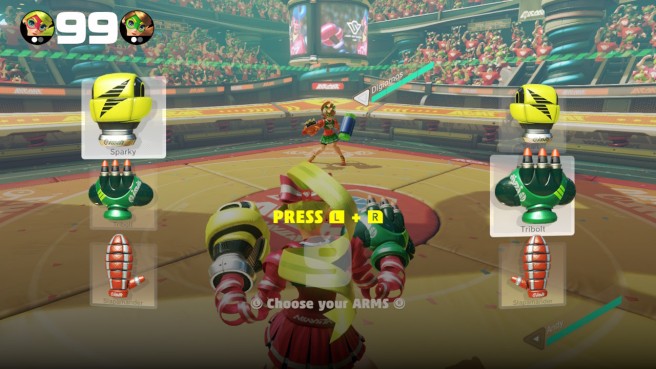 To add to the complexity, each character can select weapons, called “Arms”, to attach to their hands. By default, each character has three to choose from, and they are very different from each other. There are basic boxing gloves that do what you expect, just punch your opponent. They come in different elemental forms that can cause various effects, like freezing your opponent. Then there’s ones that shoot out multiple projectiles, and even ones that launch birds at your opponents. Every character can unlock every Arm in the game, meaning that your preferred way to play your favorite character might be entirely different from someone else’s.

As I mentioned earlier, the game features motion controls, but they are not required. If you choose to use them, making a punching motion with one of the Joy-cons will make the character punch with the same hand that you used. Throwing both hands results in a throw and tilting the controllers towards each other makes you block. You can move around the arena by tilting both Joy-con in the direction you want to move. It actually works pretty well, and during the Arms Testpunch Demo, it was the only control option I used. Now that the final game is out, I’ve found that I prefer the standard controls more.

That’s not to say that the standard controls are perfect. Moving around is done with the left stick, as you’d probably expect. Jumping and dashing are on X and Y, and your punches are on A and B or ZR and ZL if you prefer. Both R and L are used for activating your Rush Attack, a powerful move that you can use when a meter has filled up. This is all well and good, except that blocking is awkwardly assigned to pressing the left stick in. Did we really need to have multiple buttons that serve the same purpose instead of giving one of those buttons to block? Hopefully, a controller configuration option will be added down the line, but I kind of doubt it.

If you’re not a fan of multiplayer games, unfortunately, there’s not a lot here for you. The primary single player mode is called “Grand Prix”, and it’s a pretty typical “arcade mode”. You go through ten matches, fighting each opponent and getting to the end. There’s a couple minigames thrown in there two to keep things interesting, but that’s about it. I do recommend playing through the Grands Prix for each character, if only to get a good handle on how they play. 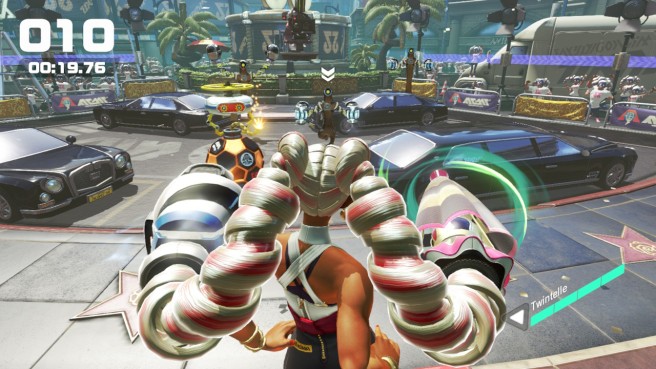 Your only other option for single player is to play the “versus” option against computer players, but you can also play against your friends. You can choose from all the different modes in the game, including one that only appears in versus, “1-On-100”. As the name implies, you fight against 100 opponents, all of which are weird versions of Helix. You take them out with a single hit, but as more and more of them show up, it becomes a lot harder to deal with.

The other minigames that show up in Grand Prix as well as the versus menu and the online “Party” mode,  are Hoops, Skillshot, and V-Ball. Skillshot is my least favorite of the bunch. It tasks you with hitting a bunch of targets within a time limit, while your opponent does the same but from the other side of the range. This means you can also hit your opponent. It’s okay, but nothing too exciting. V-Ball is a variation of volleyball, as the name implies. I found it to be way too random, but it is fun. And finally, Hoops is a basketball game where you throw your opponent into the basket. It’s very simplistic, but I never got tired of doing it. It’s just good, silly fun.

Online is where this game truly shines. There are two options, Party and Ranked. In Party, you join a lobby full of random strangers and the game matches you up and chooses what mode you’re going to play. Sometimes, you’ll do one on one fights, other times you’ll be in four player free-for-alls, and sometimes there will be two-on-two team battles. It’s a ton of fun, but if you like certain modes better than others, not getting the ones you actually want to do can be pretty frustrating.

I’ve had the most fun with the Ranked mode. Here, you only do one-on-one fights, which I’ve found to be the best way to play. You don’t have to worry about someone turtling in the corner like would in a Party match with more than one opponent. It’s just you and your opponent throwing punches and jumping around a map. It’s in matches like these that it became very apparent that this game is a lot more than just mashing buttons or flailing controllers around. It’s a very deep and strategic game, and the better player will come out on top. When you win a ranked match, a meter begins to fill. And when that meter reaches the top, you level up. Pretty basic progression, but it’s very satisfying.

As you play all of the different modes, you earn coins. These coins can be spent to get new Arms for your characters. But it’s not as simple as simply buying the ones you want. You have to play a minigame that’s very similar to skillshot, however as you hit targets, presents float by. If you hit the present, you get a random Arm. The coins are used to pay for time in this minigame. It’s fun for what it is, but if you really want a specific Arm for a specific character, it can be pretty frustrating.

One other point of frustration comes from actually learning what the different characters are capable of. There’s a little bit of dialogue in the Grand Prix that kind of suggests what your character can do, but it’s not enough. Thankfully, there is a “help” option at the bottom on the main menu. In there is a “Fighters” option that gives a more detailed description of what makes each character unique. 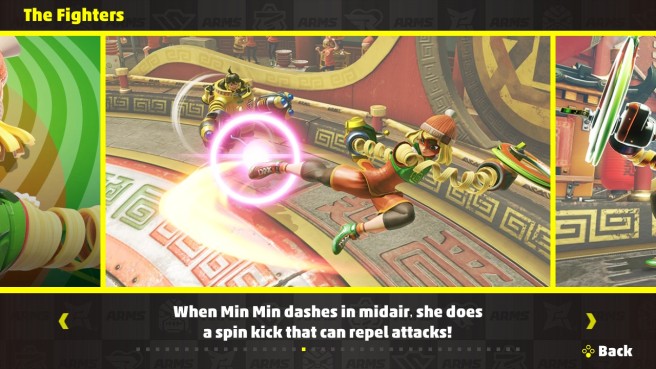 Arms has been out for about a week now, and I’ve been having an absolute blast playing it. It certainly isn’t perfect, I’d love a more robust single player mode, but it’s a lot of fun. Personally, I can’t recommend the game enough, it’s all I want to do when I get off of work. If you’re the kind of person who doesn’t typically get into multiplayer modes, however, maybe rent the game if that’s an option, or find a friend who has it and try it out. Arms is too fun to not try out.