I thought for this week’s edition of Random Game Wednesdays, I’d go back to Atari Flashback Cassics Vol 1. I haven’t had much luck with that particular compilation in the past, but I know there’s good games on there. Looking at the list, there’s plenty that I played while growing up that I liked a whole lot. So, once again, I used the random number generator and received another game that I had never played before.

RealSports Soccer is exactly what it sounds like. It’s a game where you play soccer. There’s a bunch of different options that you can toggle through using the switches on the Atari 2600 console, which is displayed on screen when you select “console” from the pause menu. You can play single player with different time limits and difficulty or you can play with a friend in multiplayer mode. I tried to play on easy with a five minute time limit. 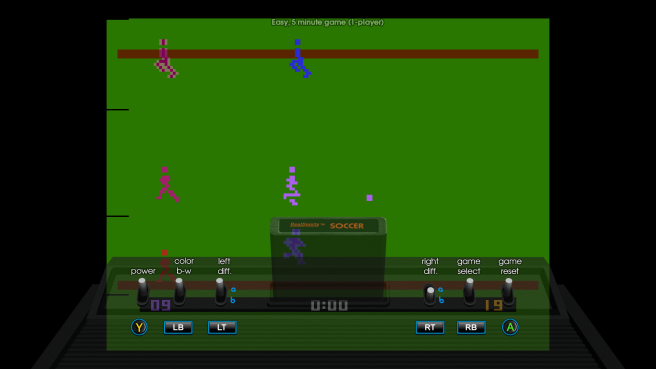 Being an Atari 2600 game means that you only have access to one joystick and one button. For such a limited control scheme, the developers actually managed to pull off a surprising amount of functions. The joystick obviously moves your character and hitting the button (which is mapped to the A button in the Xbox One version) kicks the ball. Depending on the direction that you’re tilting the stick, you can kick the ball straight ahead, towards the top of the screen, or towards the bottom.

The ball always goes the same amount of distance when you kick it. Because of this, there isn’t much difference between passing and shooting. Your goal, if you don’t know how to play soccer, is to get the ball to your opponent’s goal by kicking it around the field. In this game, each team consists of three players, one on the top, one in the middle, and one at the bottom. By passing the ball between the players, you can avoid your opponents on the way to kicking the ball into the goal. 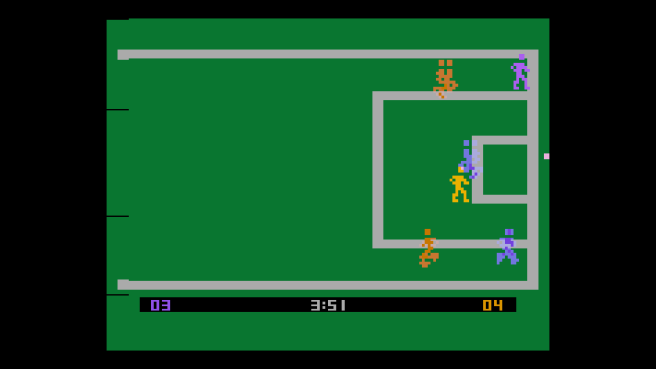 If you’re on defense, your main objective is to get the ball away from the other team. You can press the button to toggle between the three different players. The player you control runs a little faster than all the others, so you want to choose the one that’s in the same lane as the opponent with the ball, run up and take it from them. There’s no button to steal the ball just run up to it and you’ll hear a sound effect. Unfortunately, you’ll often hear that sound effect again immediately after stealing, since you were so close to your opponent that they were able to effortlessly get the ball back.

RealSports Soccer looks pretty good given the console it’s on. The field is green, as you would expect it to be, and the goals are clearly marked. The players all look like human what you would expect a basic human figure to look like, which wasn’t always a given on the Atari 2600. Each team is a different color, one’s yellowy orange, the other a blueish purple. I’m a little colorblind, so that might not actually be completely accurate, but that’s how they look to me. Whatever they are, they’re very distinct from each other, so there’s no chance of confusing the two teams.

All in all, I was pretty impressed with this game. But there is one big glaring flaw. The computer is just too good at the game, even on easy. My first time playing, I lost 9 to 19. Once the computer player got the ball, it was basically over. Even if I managed to steal it from them, they stole it back instantly and scored another goal. On my second time playing, I did a little better, but still was beaten by a good margin.

I’m very curious how the game would hold up in a multiplayer session. Obviously, the graphics don’t compare to the games of today, but the simple control and fast paced action could lead to some really fun times with a group of friends. I wasn’t able to try this out before writing today, but I’m pretty sure it would be a solid game.

While way to difficult, RealSports Soccer is a very well made game. It’s simple to play and understand. It’s not often that I find a game from this era that I didn’t grow up but still end up liking. I’m glad to say that I finally found a game I really like in the first Atari Flashback Collection.