It’s that time again, time to see how much progress I made in Tokyo Mirage Sessions this week! Unfortunately, it’s not a whole lot this time. I did manage to make a little bit of story progress and complete one side quest. But, before we get to that, let’s go over some numbers. Itsuki is currently level 54, I’m partway through chapter 6, and my total playtime is just under 40 hours.As the chapter begins, Tiki has recovered some more of her memories. She tells us that there is a way to stop Gharnef’s plan to resurrect that Shadow Dragon. It involves performing an opera called The Opera of Light: Fire Emblem. In order to do that, though, we have to enter a dungeon based on Tiki’s memories and take part in three trials.

So far, this dungeon seems pretty basic, but it looks dramatically different from the rest of the dungeons in the game. Instead of the weird, dark architecture, this dungeon looks like something you’d find in a typical fantasy game. Kind of like Fire Emblem! It’s also a lot more straightforward. That’s kind of nice in a way, though, since getting lost in the earlier dungeons was a pretty common event. So far, you just run down a hallway, fight some bad guys, and then get into a boss fight.

After the boss fight, which was fairly tough but nothing too unique, a warp opens up. I don’t actually know where that warp goes however, because Tiki has contacted me with her final side quest. So, time to leave the dungeon and go have a chat with Tiki!

Tiki had a bad dream, one where she was unable to see any of her friends anymore. Itsuki assures her that he would never leave her, and tells her that he’ll make a song for her. In order to do that, we’ll have to hunt down Tiki=Waifu again and have her teach us how to write a Tiki song. She’s usually at the cafe, so that’s where we head.

Unfortunately, she’s not there. We overhear some people talking about how the amount of Tiki songs being produced has dropped significantly and wonders if Tiki just isn’t popular anymore. Well, that’s a shame. But, it turns out that she has ended up back in the Idolosphere. So, once again, it’s up to us to go save her. It’s all pretty easy, go back to the boss room and save Tiki=Waifu as well as other Tiki composers, and we get a small piece of dragonstone.

After we save her, Tiki=Waifu agrees to help us compose a song. She doesn’t exactly give the best advice though. She tells us there are no wrong answers in music and to just kind of do what we feel. We make a song, she isn’t very impressed, and that’s that. Next, we go back to Tiki. We play her the song, she likes it, and give her the dragonstone. Then something weird happens. 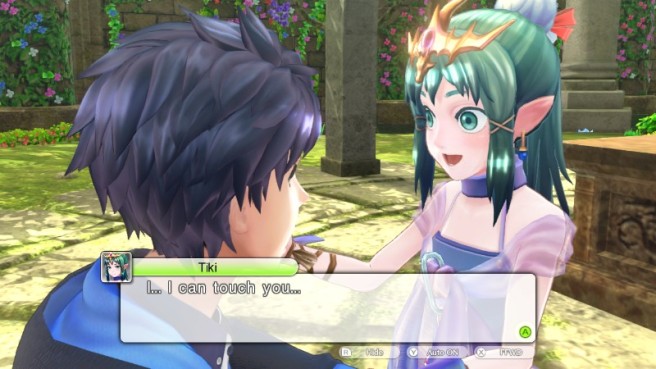 Suddenly, Tiki has a physical form. She can interact with us and eat donuts all on her own. Itsuki decides to give her a fun day where she can do everything she ever wanted. At the end, they’re on a rooftop, and Tiki says that her time is up and fades away into nothingness. Itsuki is sad to see that his friend is apparently dead, even though it’s not really clear why this would happen. Itsuki returns to the Bloom Palace and… Tiki’s there. Everything’s fine, but she’s back to not having a physical form. Okay.

And that’s what I did this week. Sorry the post was so short. Hopefully, next week I’ll have more to discuss. We’re headed to the end of the game, so the next couple weeks should be pretty interesting!