When I started Random Game Wednesdays, I knew that eventually I would end up with a game that was way too long to properly discuss. The only thing I can really do with a large game like that is to play the beginning and give some early impressions. That’s a little weird with a game like Secret of Mana, a game that I am fairly familiar with. But, it’s been a few years since I’d played it, and even longer since I played it on the SNES, so let’s take a look at the start of Secret of Mana.The game opens with your character, who I named Dude, and two other guys hanging out on what looks like a log in front of a waterfall. Apparently we’re not supposed to be there, but the kids heard there was a treasure nearby and just had to try to find it. As the kids walk across the log, Dude slips and falls off. The other kids freak out a bit and run back to town. 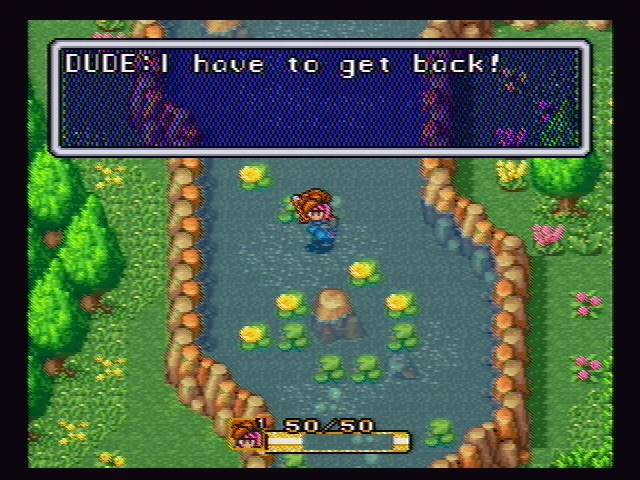 Dude lands in the water below and decides that he needs to find a way a back to the village. After a bit of running around, Dude finds that the path is blocked by some bushes, but there’s a nearby sword he can use to cut them down. After running up to the sword, Dude hears a voice tell him to lift the sword. He does so, and then a ghost appears. He says  that he was the voice… the sword… and then he vanishes. Well, okay.  Dude cuts down the bushes and heads towards the village.

At this point, we get to try out combat. At first glance, the game appears very similarly to The Legend of Zelda. Combat is in real time,  you hit the B button to swing your sword, pretty typical stuff. But what makes the game a little different than what you might expect is a meter at the bottom of the screen. Usually, it reads “100”, but after you swing your sword, it drains down to “0” then refills. If you attack again before it gets back to “100”, you’ll deal considerably less damage. This makes the combat a lot more thoughtful than something like Zelda. You need to make sure that every attack lands, because otherwise you’ll be stuck waiting for your meter to refill.

Eventually, Dude makes it back to the village. He finds the two kids from before with the village elder. At first, the elder is relieved to see that Dude is okay, but then he notices the sword. Apparently, that’s the Mana Sword, and it’s been keeping the village safe for years. Because Dude removed the sword from it’s resting spot, monsters have returned and now the village is in danger. One of the kids immediately blames Dude, even though he was just tagging along for their dumb treasure hunting scheme.Suddenly, the ground opens up and Dude and the kid fall down. 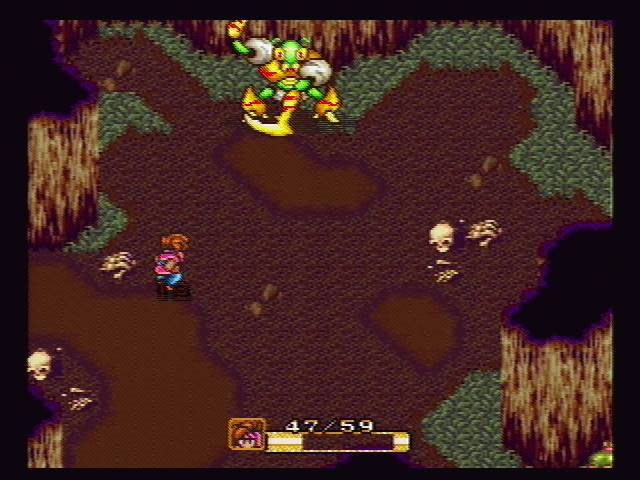 There’s a giant ant mantis monster down there that Dude has to kill. He uses spells that there doesn’t seem to be any way to dodge. I died like eight times during this fight, but it’s okay. Every time you lose, a knight who’s above ground yells to Dude to get up. You can’t lose. So, eventually, Dude kills the monster and the knight helps him out.

Because of the danger Dude has brought to the village, the elder banishes him. The knight, who introduces himself as Jema, tells him that as the wielder of the Mana Sword, it’s his responsibility to defeat the monsters and return peace to the land. He tells Dude to meet him at the water palace and leaves.

After some more combat, Dude comes across the Cannon Travel Service. This is basically the fast travel system in the game. It’s a guy hanging out in front of cannon. He tells Dude that Jema came through here and already paid for him. So, Dude hops in the cannon and gets shot to the Water Palace.

I’m going to kind of gloss over the rest of what I’ve played. From the palace, Dude starts to go to the kingdom of Pandora, but is captured by goblins along the way. The goblins start to cook him, but a girl shows up and saves him. Later, Dude gets to Pandora, and runs into the girl again. She joins Dude and I named her Lady. And that’s about as far as I got.

Secret of Mana has a very strong start. There’s a lot of character in it’s dialogue. It’s not afraid to get a little silly. The combat is cool and strategic, although I didn’t get to the point where you get magic. I remember the game having some problems with directing you to where you needed to go next, but I had no issues in the early going. It’s a great game and is definitely worth your time.

Oh, and this has nothing to do with the game, but I thought I’d mention that a friend of mine gave me his old Dazzle DVC 100. Because of this, this post is the first where I did not use emulation to make screenshots of old games. Probably not that big of a deal to you, but I think it’s pretty neat.

One thought on “Random Game Wednesdays: Secret of Mana”