I’ve gotten a lot of use out of the first Atari Flashback Classics collection. It opened up fifty games that I normally would not be able to easily get screenshots of, not without investing in special equipment anyway. With that in mind, picking up the second collection was a no-brainer. This week, the random number generator gave me a “1”, which means I played the arcade version of Asteroids.

Asteroids is a cool game, but it’s also an extremely simple one. You pilot a spaceship in the middle of an asteroid field. The asteroids bounce around in all directions, threatening to crush you. It’s your goal to shoot all the asteroids and survive. Then you move on to the next level and do it all over again. 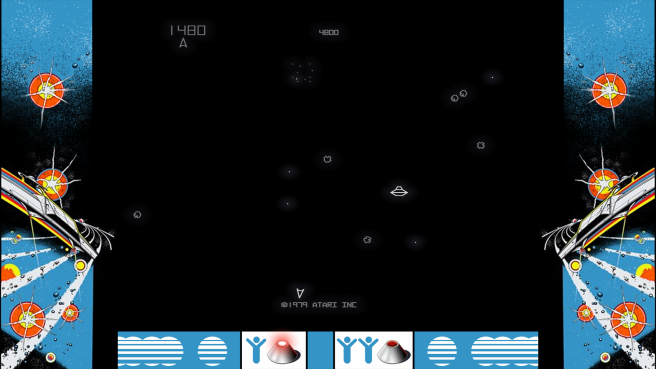 Just because it’s simple though, doesn’t mean that it’s easy. Controlling your ship takes a good amount of practice. Instead of simply moving around the screen, you hold the analog stick up to turn on your thrusters. When you stop, you still continue to move in the direction you were headed, so you can either wait until you eventually stop, or you can turn your ship around and thrust in the other direction.

Your only objective is to destroy asteroids and the occasional flying saucer. The asteroids themselves start out large, but as you shoot them, they break into smaller chunks that are much harder to hit. Just keep shooting them until they’re all gone. From what I can tell, the flying saucers only score you some bonus points if you shoot them down.

If you find yourself in a tight spot, you can press a button and activate “hyperspace”. I hated hyperspace. Basically, it removes you from wherever you currently are and plops you in some random spot on the screen. You have no way of knowing if it’ll actually get you away from danger or if it’ll stick you right in front of even more asteroids. I used it a couple times to get a general idea of how it worked and then never used it again.

Visually, the game looks about what you’d expect for a game of this era. It uses vector graphics to draw outlines of the asteroids and your ship and the rest of the game is just the blackness of space. Despite it’s simplicity, it actually looks pretty good. It’s easy to tell exactly what you’re looking at, which isn’t always the case with older games.

And that’s basically Asteroids. I thought this would turn out to be a pretty small write-up, so I took the initiative and played another game on Atari Flashback Classics Vol. 2. I played the Atari 2600 port of Asteroids.

As you might expect, the port is a downgrade visually. Everything is made up with the 2600’s typical blocky sprites. On the plus side though, the game is much more colorful. Whereas the arcade version was just outlines, this version features asteroids that come fully colored in and in a variety of colors. 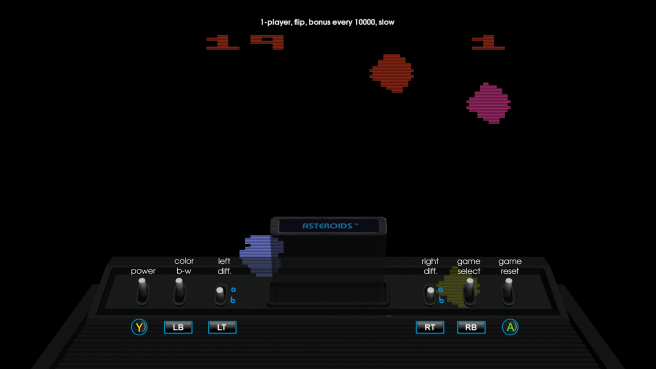 The game itself is largely the same. You move around space and you shoot asteroids. The asteroids in the arcade version moved around a little more freely, going in all directions and bouncing around. These ones are more limited, sticking to straight up and down paths. There’s still a lot of them, though, so it’s still pretty easy to get yourself stuck.

Where the Atari version really shines is it’s options. There’s a ton of different game modes to select from. They mostly change smaller things, like the speed at which the asteroids move. But, there’s also some bigger changes, like replacing hyperspace with a shield you can pull up temporarily. At the end of the day, you’re still just shooting rocks in space for a high score, but this gives you a much larger selection of how you want to go about that.

Asteroids is an old game, but it’s still a good time waster today. While the appeal of the “get a high score” style of game that was so common in the 70’s and 80’s has waned, it’s still a fun little diversion that is worth checking out.