Licensed games were a dime a dozen back in the days of the SNES and Genesis, and most of the time, they were junk. But every once in a while, you’d come across one that didn’t seem too bad. You might even call it “good”. The Super Star Wars trilogy on Super Nintendo were games that fit that description and ate up a good chunk of my childhood. But, standards change with time, and games that we were into when we were younger suddenly aren’t always worth going back to. So, how does Super Star Wars hold up?Super Star Wars is the first in a series of games based on the original Star Wars trilogy of movies. Despite preferring both Empire Strikes Back and Return of the Jedi in their movie forms, the first game has always been my favorite of the three. It’s the only one that I beat without the help of any cheats when I was a kid. Even back then, when I wasn’t too critical on the games I played, the second and third games always seemed way too hard to me, to the point of being unfair. 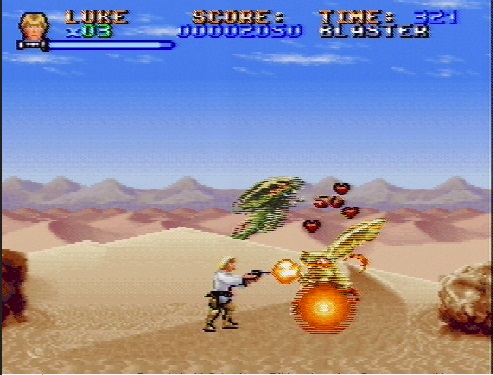 That’s not to say that the first game wasn’t hard, however. I played through the first three and a half levels of Super Star Wars before writing this piece, and got absolutely destroyed. But, even so, with a little patience and a willingness to learn when and where enemies would appear, I made it through. Super Star Wars is stupid hard, but it’s completely possible and totally fair.

The game begins with a shockingly well done recreation of the beginning of the movie. You get the traditional title crawl complete with John Williams’ classic Star Wars theme, played about as well as you could expect from the Super Nintendo. After the words finish scrolling, the camera pans down to reveal a Star Destroyer closing in on Princess Leia’s ship. After taking a few blaster hits, an escape pod emerges from the ship and shoots down to the planet below. Sure, it doesn’t include the Star Destroyer actually capturing the ship, or Vader boarding it, but this is still great and much better than I would have expected.

But then you start the first level. You’re Luke Skywalker, and for some reason, you’re running across the desert while a constant barrage of the local wildlife is going out of their way to murder you. Remember that from the movie? At this point, the game is a pretty straightforward action game. You run from left to right and shoot everything that gets in your way, which includes birds, scorpions, green rabbit like things, and other monstrosities that didn’t appear in the movie.

I’m pretty sure that at this point, Luke wouldn’t even have a blaster on him. He’s just some civilian kid. But whatever, you have a blaster and you aren’t afraid to mow down tons of animals to get wherever it is you’re trying to get. Sometimes, you’ll come across a power-up that looks like a gun, which upgrades your blaster. The upgrade will stay with you until you die, and can be further upgraded by finding more power-ups. 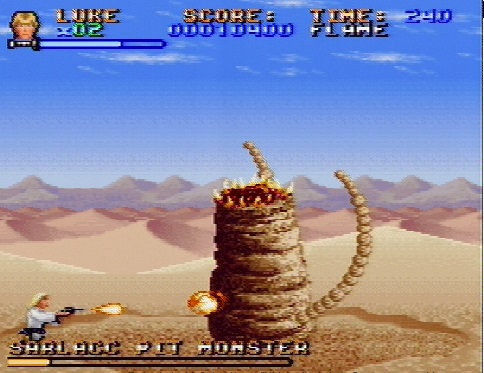 Eventually you get to the end of the stage where you fight the boss, the Sarlaac Pit Monster. Yes, apparently Luke just stumbles into the beast that ate Boba Fett in Return of the Jedi and despite not having any training yet, manages to kill it. The fight itself is fairly easy. The monster will emerge from the sand and throw stuff at you. Just keep your distance and never stop shooting and you’ll have him beat in no time.

After defeating the Pit Monster, Luke stumbles onto C3PO, who claims that his friend, R2D2 has been captured by Jawas. Remember how in the movie, Luke’s uncle simply buys the droids from the Jawas? Well, in the game, C3PO convinces Luke to just start murdering all of the Jawas.

Level 2 plays entirely differently than the first level. Now, you’re in Luke’s Landspeeder with C3PO. This level uses the Super Nintendo’s Mode 7 to create a 3D environment to hover around in. You have to kill twelve Jawas by shooting them with the Landspeeders blasters. I don’t think the Landspeeder in the movie had any weapons. But whatever, you hover around and shoot the bad guys and then head towards the Jawas’ Sand Crawler.

The third level takes place outside of the Sand Crawler, and plays closer to the first level. However, instead of just running in one direction, There’s now an emphasise on really precise platforming. Also, the Jawas are going all out to stop you, with tons of laser cannons and fire traps. And can you really blame them? They’re just trying to run a business, and here you are committing Jawa genocide.

This level is easily the most difficult of what I played today. The controls don’t feel like they were designed with platforming in mind, and you’ll often jump straight over what you were trying to land on. It can be very frustrating, but with a little practice, you’ll get the hang of it. After making it to the top of the Sand Crawler, you find a hatch and jump inside to the next level. This is another action-platformer level.

Despite a really great first impression, it turns out Super Star Wars is not a particularly faithful adaption of the first movie. But is it a good game? I would say yes. It’s not perfect by any means and can be pretty frustrating. But it’s also rewarding and filled with enough nostalgic Star Wars characters and settings that it’s easy to overlook the blemishes.