Earlier today, investigative journalist/blogger Emily Rogers posted some rumors about the upcoming Legend of Zelda Wii U game. None of it is confirmed, but she’s been right in the past, most recently when she stated that a Paper Mario game was in development for Wii U before Color Splash’s announcement. So while we can’t treat these as fact, there’s good reason to at least think about them seriously. 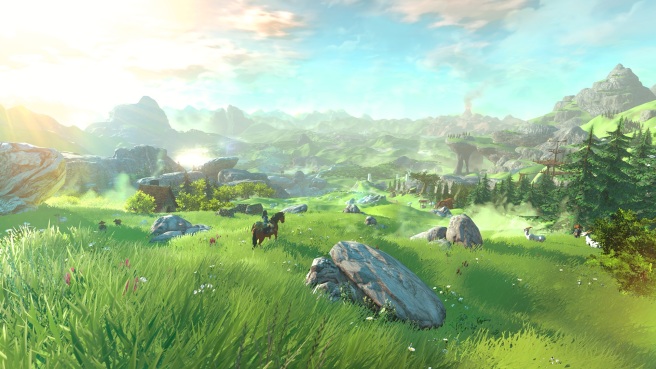 When I’m not playing through Xenoblade Chronicles X, I’ve been working my way through The Legend of Zelda: Twilight Princess HD. The game is still very good, but it’s making one thing very apparent. The Legend of Zelda needs change. Everything about Twilight Princess feels stagnant. It’s more or less the same experience as Ocarina of Time. Same mechanics, same style, even some of the situations you get into are the same. But the thing is Ocarina of Time is still a very fun game, and thus, so is Twilight Princess. But why would you choose to play one over the other?

Well, thankfully, if Emily Rogers is to be believed, change is coming to The Legend of Zelda. We had already heard a few things that suggest this, such as Eiji Aonuma stating the game would be an open world. But just how many more changes are we looking at?

Three rumors were given. The first is that the game is currently in development for both the Wii U and Nintendo’s upcoming console, which is currently code named the NX. People have been predicting this for a long time, but this is the closest we’ve gotten to actual confirmation of it. This is a big deal, because the Wii U simply isn’t do too well. It would make a lot of sense for Nintendo to simply switch development to an NX version and hopefully grab a new audience that largely ignored the Wii U. But, if they’re putting the game out on both, then they aren’t abandoning the Nintendo faithful who actually did buy a Wii U. It’s a move that’s a little weird, since developing for multiple systems would cost extra money to cater to a pretty small audience, but it’s a huge win for Nintendo’s fans.

The second rumor is that you’ll be able to choose Link’s gender. Personally, I’d like to see a full-blown character creator, but at least giving us a gender option is a big step in the right direction. I know a lot of people will disagree with this sentiment, but Link has always been an avatar for the player, and never really a character in his own right. Sure, there’s an iconic look for him, but what would you say are Link’s characteristics? Basically, he’s courageous. That’s about it. The only times that I can think of that any attempt was ever given to actually make Link a character were in the awful CD-I games and the old Zelda cartoon series. Acknowledging that Link is just an Avatar and that his gender doesn’t matter at all to the series is a pretty big deal.

And finally, the third rumor is that the game will have voice acting. I’ve always found it strange how against this some fans are. They’ll say that it’s tradition and it shouldn’t be messed with. But the thing is, I don’t think it is a tradition. When Zelda first came out, we didn’t have voice acting in games. It’s not that there was an active choice to not include it, it was a limitation of the technology of those days. The only tradition is that Link doesn’t talk. And based on what Emily Rogers has said, he still won’t. This goes a long way to making the new Zelda feel like a modern video game, instead of just making Ocarina of Time again.

E3 is just a couple months away, so with any luck, we should know if any or all of these rumors are true in the very near future. Personally, I’m hopeful that they all are. I love The Legend of Zelda, but it’s a series that needs to get with the times, or eventually it will be left behind.