It feels a little weird writing a first impressions piece on a game that I obsessed over a couple decades ago, but here we are. Earlier today, the Nintendo 64 game Turok: Dinosaur Hunter released on Nintendo Switch, a port of last year’s Xbox One version, which was itself a port of a PC version from a few years earlier. But I didn’t play those versions. I did, however, spend a good chunk of my day with the Switch release.

The first couple things I noticed were completely superfluous. For starters, for some reason, this game is no longer called “Turok: Dinosaur Hunter”. Now, it’s just “Turok”, and I have no idea why. The other thing is that the boxart has been changed. I’m actually happy with this. The original boxart showed Joshua Fireseed in a struggle with a raptor. The problem is that Joshua Fireseed does not appear in this game, and would instead be the main character of Turok 2: Seeds of Evil. The new image shows Tal’Set, the Turok of the first game, is the same raptor struggle. This makes way more sense.

But enough about that stuff, how does the game itself hold up? Shooters have come a long way since 1997 and Turok isn’t the N64 series that would end up influencing the entire genre. It probably should have been though. When compared to GoldenEye and Perfect Dark, Turok moves a lot snappier, has larger levels, and is more open-ended. It even had a control scheme that feels much closer to modern shooters than Rare’s shooters do.

In the N64 version, the C buttons were used for moving forward, back, and strafing left and right. The control stick was used for looking around. This is almost identical to how we play shooters now, except that movement is done with your right hand and aiming with your left. As a result, slapping modern controls onto this game feels totally natural and I was quickly running through the jungle blasting dudes with my shotgun with ease.

And when I say running through the jungle, I really mean that. It’s weird to think about now, but movement speed in shooters used to be blisteringly fast. Tal’Set feels like an Olympic athlete as he flies through the levels, blowing holes in soldiers and raptors without ever needing to catch his breath. No, it’s not realistic, but it’s fun. 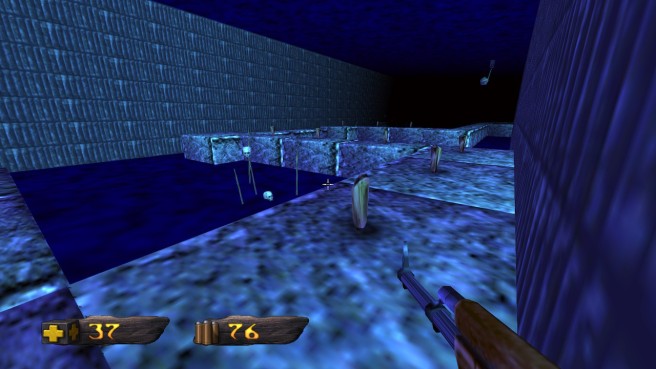 Thankfully, the game runs much better than it did on the N64. Most notably, Turok’s famous fog is completely missing. While there’s certainly an argument to be made for the fog creating a pretty cool atmosphere in the original, the fact is it’s only there because of poor draw distance. But not you can see enemies all the way on the other side of an area as soon as you walk in. In a weird way, this makes things a little easier, since you don’t get blindsided by enemies nearly as often, but I think that’s an improvement.

One of the interesting things about shooters from this era when compared to modern ones is the need to do things other than shooting. Rare’s two Nintendo 64 shooters featured mission objectives you had to complete in order to pass each level. Turok has keys that you must find in order to unlock later levels. It’s entirely possible to get to the end of a level and miss a key needed to get to the next one, resulting in having to turn around and poke around. I’m sure that will annoy some people, but I always liked having to pay more attention to what I was doing instead of just shooting everything. And it leads to some non-linear gameplay, as the first level has keys that unlock levels 2 and 3, giving you a little choice in how you want to progress. I went with level 2 first because I’m not crazy.

You may have noticed that I haven’t really touched on the story yet, and that’s because I don’t know what it is. The game itself doesn’t really tell you anything, I’m pretty sure the old instruction manual did though. So, everything I do know is purely from childhood memory. I know you play as Tal’Set, who is the current Turok. Turoks protect the Lost Land, which is some place where dinosaurs live. The bad guy is named The Campaigner, but I don’t know what he’s doing there or what he’s campaigning. I’m sure it’s all on a wiki somewhere, but I’m not worried about it.

Overall, I’m very happy with this port so far. Turok: Dinosaur Hunter was a really cool game that needs more recognition. Hopefully this release will lead to more people checking it out themselves.