The second Atari Flashback Classics collection must be full of games that I’ve never heard of before. Just like Gravitar, Atari Video Cube is a game I knew nothing about, but actually came away pretty impressed. It’s still an Atari 2600 game, and thus you can’t expect a whole lot of depth. But, what’s here is pretty cool.

Atari Video Cube is a puzzle game. As the name suggests, it takes place on a cube. Each side of the cube is broken up into nine different squares of varying color. Your goal is to make each side of the cube have all nine of their squares be the same color, much like a Rubik’s Cube. The difference here is that instead of sliding whole sections of the cube, you’re simply picking up one square and swapping it with another.

This all sounds very simple, and honestly, it kind of is. The challenge comes from the fact that you cannot walk over squares that are the same color as the square that you are currently holding. This means that if you don’t set up everything properly, you might find yourself having trouble getting to the spots you want to go to. You only see one side of the cube at a time, so sometimes you’ll try to walk to the next side, only to not be able to move due to the next available square being the same color as the one you have.

Like a lot of old games, your real objective is getting a high score. In this game, that’s accomplished by completing the puzzle with as few moves as possible. In my time playing, I failed this completely. My strategy for finishing the puzzles was to focus on one side at a time, which works quite well. It does result in me making way too many extra steps. But, whatever, I completed the puzzle, and based on the fact that that gave me a rare Xbox Achievement, I doubt too many other people can say that, at least on this platform.

All the games in the Atari Flashback Classics collections come with scans of the instruction manuals. Apparently, Atari took the time to write a weird backstory for a pretty simple puzzle game. Basically, you’re a dude named Hubie who really, really likes squares. He’s always doing things that involve squares, like eating ravioli and sleeping in a square shaped bed. Then one day, he woke up and was in a weird cube puzzle world. Now he knows his mission is to solve the puzzles as fast as he can to teach other people to do the same. Sure?

Weird story and simplicity aside, Atari Video Cube is a pretty cool game. It’s pretty unique for the system, especially in the way it has you on a cube, rather than a simple flat surface. Not that it’s displayed in 3D or anything, but you really get this feeling that this is a fully featured cube. If you like puzzle games, this is one to at least take a look at. 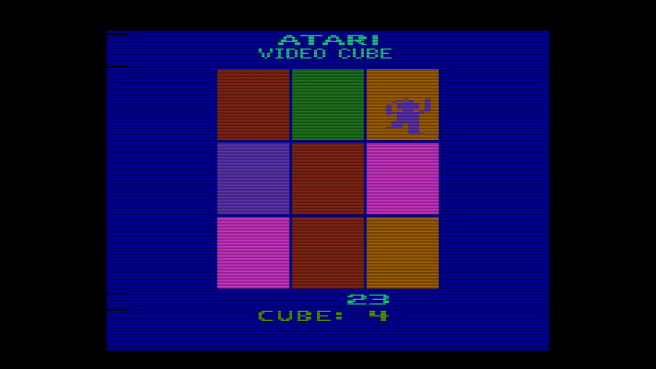