Dragon Age Origins is one of those games I always meant to play through but never got around to it. Sure, I started it a few times, got a number of hours in, and really enjoyed myself, but for some reason I always dropped off before getting to the end. Well, not this time, because this time I have a weekly blog series to write, so I just have to keep playing.

Just like my previous two Check-In series, Xenoblade Chronicles X and Tokyo Mirage Sessions #FE, I’m going to begin each episode with the level my main character currently is and the amount of time I’ve played. This game doesn’t really have “chapters” like the other two, so I won’t be including that or any sort of equivalent. Unfortunately, due to my delay in getting the first week’s post written, I’ve actually done the play sessions for the first two episodes already and I completely forgot to write down the information from the first week before starting the second. So, this stuff will start in the next episode.

The game begins, like many RPGs do, with creating your character. What’s interesting about Dragon Age Origins, is that what race you choose actually determines the playable origin story for your character. In my previous attempts at playing through the game, I went with the two versions of elves, and each time chose to recreate my Final Fantasy XI character, Ivanooze (or Ivan Ooze as he was called in Final Fantasy XIV). For the sake of playing something new, I went with the Dwarf Noble this time around, but still named him Ivan Ooze.

Dwarf Noble Ivan Ooze is the second son of the king of the Dwarves and has been appointed the new military commander. There’s a ceremony being held in his honor, which includes a gladiator-like tournament called a “Proving”. Well, we have to check that out, but first, we notice a lady, who notices us and runs into another room.

Turns out that lady was our character’s brother’s mistress. We tell her to get out of here before looting everything in the room. This is around the point where I started to notice that this game has not aged very well. I’m sure this isn’t what a lot of people want to hear, but the game is not pretty to look at and controls really clumsily, at least in the Xbox 360 version. Ivan Ooze always runs just a little too fast, like he’s in the final sprint of a marathon. And sure, I can slow him down by not pushing the analog stick the whole way, but it just doesn’t feel right.

So after sprinting around my brother’s room and rummaging through all his stuff, my buddy Gorim and I head to the merchants, but come across two people arguing. Apparently, one of them wrote a history book about the other’s house, but didn’t treat the house’s patron as the embodiment of perfection. I sided with the historian, and the other left angrily, vowing vengeance. I told Gorim to have him killed. He took care of it right away. Gorim is cool like that.

After going through the various merchants and seeing what they had to sell, I came across two women. Apparently, they were commoners looking to bed a nobleman so that they too could become a noble. Instead of deciding on one or rejecting them outright, I asked both of them to meet me in my room tonight. Because, why not? And with that out of the way, I went to the Provings.

I talked to the dwarf running the Provings and asked to participate, despite the fact that they were for my honor. This led to my first taste of the game’s combat. I should note, I’m playing the game on easy, but even so, the combat is pretty simple. Since I’m only against one opponent at a time during the Provings, I don’t have to worry about targeting. I just hit the A button, and Ivan runs off and starts swinging. I have some skills that I can use, but that’s really all there is to it. I’m not complaining though. There is depth, but most of that comes from what skills and attributes you assign when leveling. In combat, so far anyway, you’re basically just swinging.

I win the tournament, and the head to the banquet. Here, I meet some politicians. One of them asks me to support his cause of trying to get dwarves who have been banished to the surface back home. I decide it’s a worth cause and agree to go along. The next one I talk to tells me that he’s just using me for some scheme. I call him out on it, and she was right! Man, I am good at this political stuff.

Also present is Duncan, leader of the Grey Wardens. The Grey Wardens are a group of fighters working to stop the Darkspawn, which is apparently the great evil of this game. Duncan tells me he sees great potential in me, but I tell him I can’t join the Wardens because I have a duty to my kingdom and can’t leave the underground.

After talking to Duncan, the king asks me to fetch my brothers so that the feast can start. I find them in my older brother, heir-to-the-throne Prince Trian’s room. Trian’s kind of a jerk, and seems weirdly jealous of me. After he heads out, my younger brother, Bhelen tells me that Trian fears that I have been favored by the king, and thus might end up as the next king despite not being the next in line. Because of this, Trian intends to kill me. I tell Bhelen that we should should just watch and see what happens.

After the feast, it’s time to head to bed. There’s a mission tomorrow to recover a shield. The game jumps ahead to the beginning of the mission. Although we didn’t get to see how that situation with the two ladies ended up, Gorim tells us that he was imagining it. That’s weird, bro.

On the mission, I am to head to the Aeducan Thaig, and would encounter two scouts along the way. After meeting up with them, I am to use my signet ring to open a casket that contains the shield. Seems simple enough. Along the way, we encounter some Darkspawn, but it’s nothing to bad. Soon we find the casket, solve a simple puzzle, and then achieve the shield.

On our way back, we’re startled to find the body of Trian on the ground. While we examine it, Bhelen and some other dwarves show up and accuse me of being the murderer. It turns out this was all a scheme of Bhelen’s to get both his brothers out of the way. I end up getting forced into the Deep Roads, where I have to fight Darkspawn until I inevitably die. Thankfully, I run into Duncan. He recruits me for the Grey Wardens, and we head off to Ostagar where the human king, King Cailan, is preparing for a final stand against the Darkspawn.

At Ostagar, I meet up with another Grey Warden named Alistair as well as two other recruits. I also meet King Cailan, who is overly optimistic about this upcoming battle, and Teyrn Loghain, the king’s obviously evil father-in-law.

As part of the ceremony to become a Grey Warden, Duncan sends the four of us out to the swamps to recover some paperwork that shows that three different groups have all pledged to assist the Wardens, as well as acquire some Darkspawn blood.

Getting the blood was easy enough. Just kill some enemies and eventually you’ll get it. Getting that paperwork was a little more involved however. After running around the swamp, I came to the ruins of where they were supposed to be. Unfortunately, they weren’t there. However, I run into Morrigan, a witch of the swamp who assists me in getting them back.

Now that we’ve got everything we need, we can begin the ceremony and become a Grey Warden. This means that we have to drink that Darkspawn blood we gathered. The first recruit drinks it and dies immediately. The second one freaks out about this and refuses to drink, so Duncan kills him. Ivan Ooze drinks it and is totally okay. It’s good to be the main character.

Now it’s time to begin the battle. Our job is to light a beacon at the top of a tower to signal Loghain’s men to attack. So, we fight some guys, head to the tower and keep fighting our way up. Eventually, we come across an ogre. We quickly dispatch him and light the beacon. I kind of wonder how much harder this would be if I wasn’t playing on easy. 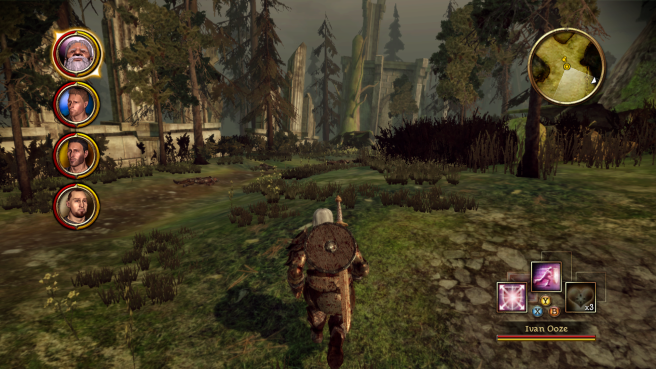 Instead of ordering his men to charge, Loghain retreats. This results in King Cailan’s and Duncan’s death. The mission is completely botched and all hope seems to be lost. The end.

Just kidding, Ivan Ooze wakes up in the home of Morrigan and her mother Flemeth. Apparently, Morrigan saved Alistair and I from the battle. After resting up and reflecting on what exactly just happened, Alistair and I decide to use the papers to gather up support to finally stop the Darkspawn blight. Flemeth tells Morrigan to tag along with us, to her dismay. But now I have a mage, and that’s pretty neat. We head off to a village near Ostagar to discuss our next move. And that’s where I stopped for the first week.

Dragon Age Origins is pretty cool so far, but it’s definitely aged pretty poorly. Thankfully, the story still shines through, even if the gameplay has some wrinkles. Week 2 should be up real soon, as in the next day or two, so I hope you will continue to join me in my journey through this game.