No amount of weird animations or clunky controls will prevent me from continuing to play through Dragon Age: Origins, even though I’m having much less fun with this one than previous Check-In games. Despite that, I made some serious progress this week. But as always, before we get into all that, let’s talk about some numbers. My current play time is just under 14 hours and Ivan Ooze’s level is 11.

When we left off, Isolde had begged Teagan to come with her to the castle in Redcliffe. It seemed like something was definitely up,  but it would serve as a good distraction for us. So, with that out of the way, we head to the secret entrance Teagan told us about last week and enter the castle.

Once inside, we find a blood mage who has been imprisoned. He tells us that he was hired by Isolde to teach her son, Conner,  magic. Apparently, Conner is a mage, which is highly frowned upon. He should have been taken away to the mage tower to be among other people like him and train to use his abilities, but Isolde didn’t want that kind of life for him. This is likely what’s caused the current problem in the castle. My party tries to talk the mage into helping us out, but he opts to just stay in his cell for now.

What follows is a bunch of running around and killing monsters. Pretty typical stuff for this game at this point. I don’t want to come off like this kind of thing has no value, because it is still fun. However, it’s not really any different from any other combat encounter in the game. You just run through it, kill all the baddies, open the treasure chests, and continue. There’s not a whole ton more to say about it.

Eventually, we arrive at the courtyard on the other side of the main gate to the castle. We quickly dispatch the monsters in the area and then open the gate, letting the other fighters into the castle. Together, we all rush through the main entrance, where we find Teagan dancing like an idiot to entertain Conner.

Conner has clearly been possessed by a demon. After he notices us, he sends some monsters to fight us, which we quickly deal with. Conner manages to talk over the demon possessing him, letting us know that he really is still in there. So, now we need to figure out how to deal with him. The obvious solution would be to simply kill him, however that’s not very cool. Isolde suggests that we get that blood mage out from his cell and see if he knows anything.

Thankfully, he has a solution. He can open a portal into the Fade using blood magic, but whoever goes in to deal with the demon will be killed. Isolde says she’ll do it, but instead I decide to run to the mage tower and ask them to do me a solid. They agree to help and we head back to the castle.

On the way back, I get attacked by that elf guy who Loghain sent after me. I defeat him pretty easily (as a reminder, I am playing on easy, so none of the combat sections have been even remotely challenging) but decide not to kill him. He tells me that he’s already considered dead for not being able to finish his contract to kill me, so with nothing else to do, he joins me. Hey, new party member.

Back at the castle, Irving and the other mages from the tower open a portal into the Fade. We have to send a mage through, and I choose to send Wynne. So now I’m back in the Fade, my absolute least favorite thing about Dragon Age. This section is a lot less confusing than the last one. Wynne basically just has to run around, talk to Conner, fight monsters, and then repeat that like four more times. Eventually the demon is defeated and Conner is free.

That’s all well and good, but the real reason I’m at Redcliffe is to gain the help of Arl Eamon, who’s currently unconscious. We’re told of a way to help him, but instead of going for that right away, I take a break by going to the woods and trying to recruit the elves to my cause.

One of the more annoying things about the story in Dragon Age: Origins is that apparently everyone is dealing with a near apocalyptic situation on top of the whole Darkspawn thing. For the elves, it’s an attack from werewolves. My party talks to the leader of the elves who tells us about how the werewolves attacked and cursed many of the elves. Taking out the source of the curse will save them, and we agree to help them out.

Almost right away, we have to fight off some werewolves. They’re kind of silly, but seem to have the ability to think, not the pure uncontrollable beasts that you’d think they’d be. They say that they must kill the elves for their crimes, but we kind of just keep going and not really worrying about that too much. At least not yet.

Eventually, we find a crazy old man in the middle of the woods. He talks only in questions, which is pretty frustrating, but basically we learn that there is a tree that has been bothering him and he’d like us to kill it for him. If we can do that, he can help us get to the center of the woods, where the werewolves hang out. So, we go looking for the tree. Turns out, the man had stolen an acorn from the tree, and if we can get it back the tree will help us get through a magical barrier that’s preventing us from getting to the center. I decide to side with the tree. After fighting with the crazy man and getting the acorn back, the tree gives us some wood which let’s us pass through the barrier.

Once we’ve gotten through, we find the werewolves base of operations. Their leader is a forest spirit who tells us that she was created by the leader of the elves. Apparently, some humans had killed the elf’s family, so he created her and the werewolf curse to get back at them. But it’s been so long and the people affected aren’t even the same humans anymore. The spirit wants to talk to the elf leader and get things resolved peacefully. Turns out he followed us in, and he isn’t having any of that. We fight, and eventually he surrenders. He reverses the curse, which also leads to his death. But hey, the new leader of the elves is happy to be done with the werewolves and will pledge to join our cause.

And that’s this week’s Dragon Age. I still have to finish up the Arl Eamon story and then go to the dwarves, but things seem to be advancing pretty quickly. Check back here next week and see how much further I can get. 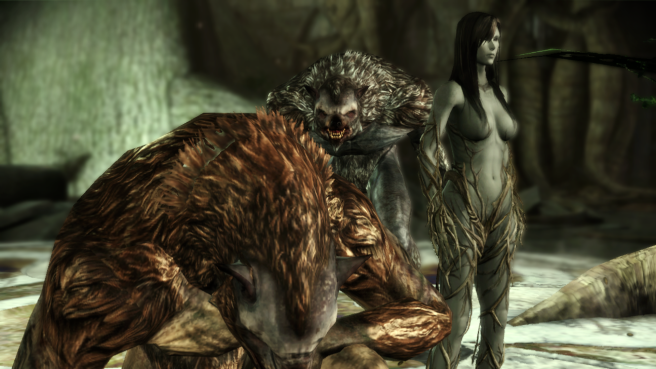