Once again, it’s time to see what I’ve done in Dragon Age: Origins this week. I’m not going to lie, this was easily the worst week I’ve had with the game. We’ll get into the specifics in just a little bit, but this week features stuff that was so bad, I don’t think that it was a product of the game aging poorly. On the plus side, it’s my understanding that this particular section was disliked even when the game first came out. But, before we talk about that, we have to talk about numbers. I have currently played the game for just under 10 hours and Ivan Ooze is level 10.

Last week, we left off with our heroes being thrown into the Fade by the Sloth demon. The Fade is a realm of dreams that mages and demons can traverse. As such, the people stuck in the Fade often experience nightmares. My character has been separated from my party members, so my mission is to find them, release them from their nightmares, and then defeat the Sloth demon.

On paper that doesn’t sound too bad. Unfortunately, the Fade is a confusing mess. You have several different sections that you have to complete, and in each section you’ll find paths that you can’t do access. These paths include mouse holes, ghostly doors, fire, and massive locked doors that can’t be picked. To use these things, you need to find NPCs that are having issues, defeat them, and then have them pass on their power to you. 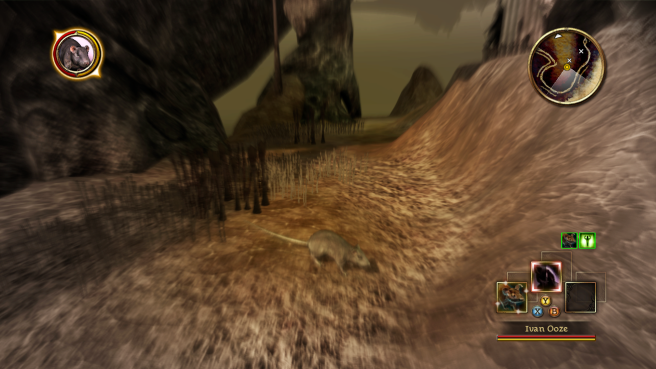 Those powers manifest themselves as forms that you can shapeshift into, the first of which was a mouse. Armed with my new mouse form, I could travel between mouse holes, opening up new areas and finding new forms. Again, this sounds alright. It’s kind of like a mini Metroid game, running around slowly opening up new paths to find new forms to open even more paths. It fails, however, because of the boring and monotonous level design, the shear length of this sequence, and the confusing nature of the whole thing.

I’m not going to go into much more specifics of what went on, but I ran around and opened every path I could. Eventually, this opened the areas that my party members were. First I found Wynne. In her nightmare, she believed that she was surrounded by dead mages, and that their deaths were somehow her fault. After a little bit of talking, I got her to understand what was going on, and together we beat up some demons. The game glitches, unfortunately, if you try to talk to Wynne after the combat is over but before the next cutscene plays. It makes you do the whole conversation again. During the combat, I had beheaded the demon that was manipulating Wynne, and she stayed decapitated during this repeat of the scene. So that’s fun. 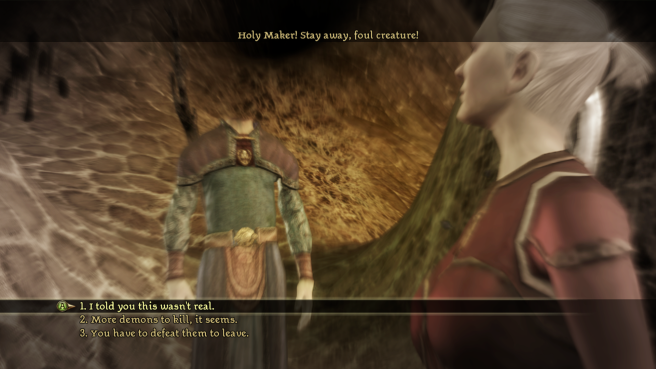 Next up, I freed Shale. His nightmare was simply that he was stuck as a statue again. I talked to him, he woke up, and all was good. Finally, I went to free Leliana. She’s praying with who she believes is the Revered Mother. After talking to her a bit, I get her to realize that something isn’t right, and she snaps out of it. We fight the Revered Mother, who is actually a demon, and then we’re done. With all my party members saved, I confronted the Sloth demon, killed him, and escaped the Fade.

There’s still more work to be done in the mage tower, however. We find a templar who’s pretty freaked out. He tells us we have no way of stopping the blood mages and we must destroy everyone in the tower. I choose against that, because I really want the mages on my side. The templar’s not too happy about that, but whatever. The actual fight isn’t much. We go in, fight the blood mages and save the good mages. They agree to join us in our fight against the Blight, and we’re done with this section.

Next off, I head to Redcliffe to see Arl Eamon On our way there, Alistair confesses that he’s actually the king’s heir. That seems like the kind of thing that maybe he should have told us earlier. But yeah, that’s a thing. 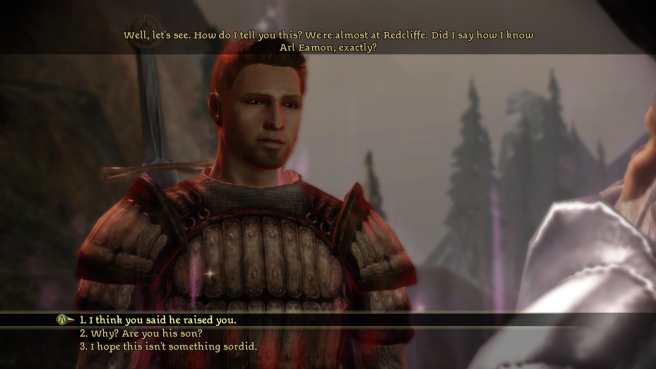 When we arrive, we learn from Bann Teagan (the guy who questioned Loghain’s retreat from Ostagar) that zombies have been pouring out of the castle at night and attacking the village. No one knows if anyone is alive inside the castle, but it doesn’t seem likely, what with all the zombies.  We agree to help defend the village that night, and go about getting things ready. This includes convincing a drunk blacksmith to get to work repairing weapons and getting the Revered Mother of Redcliffe to convince the soldiers that God is on their side.

With all that out of the way, it’s time to deal with the zombies. This got pretty hectic, but never really difficult. That’s probably due to me playing on easy, but still. It was pretty cool to see just how many enemies it would throw at me at a time, and I can imagine this being considerably more difficult if the enemies just hit a little harder. 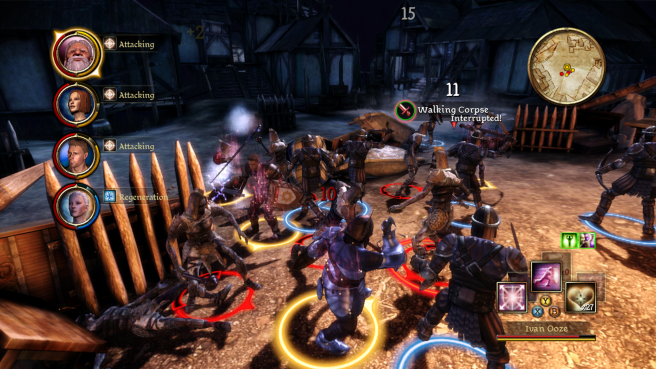 The zombies are defeated and Redcliffe still stands. Teagan tells us that we can enter the castle via a secret passage that is opened by his signet ring. Just then, the Arlessa, Isolde shows up and begs Teagan to return to the castle with him. It seems pretty suspicious, but Teagan agrees to go with her. If nothing else, he’ll serve as a distraction while we sneak in.

And that’s where I left off. The Fade was total trash, and I really hope that there’s nothing else quite like that later in the game. Redcliffe has been much better so far. Hopefully it’ll stay about as good as it’s been.

As a quick note, there might not be an episode next week. The Nintendo Switch is out in a matter of days and I plan on playing Zelda as much as possible. As such, I doubt that I’m going to get much Dragon Age in. But, the series will return the week after next.