Finding time to play long, demanding games when you’re also working a full time job and trying to keep up on other things is surprisingly difficult. But that’s what this series is, and that’s what I’m going to keep doing. As of right now, my current play time in Dragon Age: Origins is 6 hours and 55 minutes, and my main character is level 8. If you read the previous week’s entry, you know that I kind of screwed up and forgot to write down my time and level before starting week 2’s play session, so I don’t know how much actual time was spent this week.

When we left off, Ivan Ooze, Alistair, Morrigan, and Bork Doggo had just arrived in Lothering, a village near Ostagar. Right away, we come across some highway men who try to get some money out of us. I get them to back down, because we’re a group of super tough Grey Wardens or whatever. But then something sets them off and we end up fighting anyway.

Weirdly, despite the fact that these highway men have been a problem for everyone who has come to Lothering seeking refuge, people don’t seem too happy that I killed them. A lot of them complain that I brought fighting into the village, which is exactly what they’ve been trying to avoid. Sorry, I guess?

While there was some side quests to do earlier in the game, Lothering seems to be the point where this really opens up. Not only are there quest givers strewn about, but there’s also a quest board that gives out fairly simple quests. They’re not overly interesting, but they are a good way to get more experience and they’re entertaining enough.

Eventually, I get to the Chantry, which is more-or-less a church. There, I talk to some people about what’s been going on and find someone who Alistair knew. He also, was the end goal for a quest that I got way back in the swamp, so that’s neat. Anyway, in the back of the Chantry is their leader, the Revered Mother. After explaining our plight, she gives us her blessings and we’re on our way.

While going about questing, I came across a bar. In there, we run into some of Loghain’s men. They’re not too happy to see us and decide to arrest us. A woman shows up and tries to talk them out of it, but we end up fighting. After quickly defeating them, I send them back to Loghain with a message, that the Grey Wardens know what really happened.

The woman’s name is Leliana, and she was formerly with the Chantry. She claims that the Maker gave her a vision that she was to join the Grey Wardens in fighting the Darkspawn, so she’s going to tag along. She’s a rogue, which means that she has the skills needed to open the tons of treasure chests that I haven’t been able to open so far, so of course I’m more than happy to let her come along. 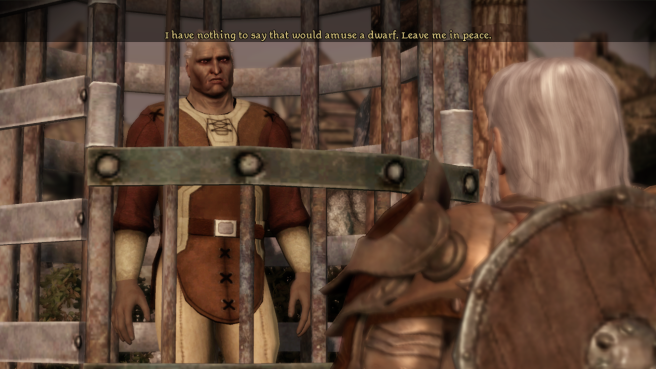 In the town, we find a cage that currently houses a large, beast-like man named Sten. Apparently, he’s of a race of monster-men called the Qunari, and he’s been imprisoned for murdering a family. I decide that he would be useful to the group, and I’m kind of surprised that I didn’t get any real resistance from my party over that. The Revered Mother has the key to his cage.

We return to the Chantry to try to talk the Revered Mother into letting Sten go. It turns out, having Leliana along makes that a lot easier. She’s able to convince her that this is for the good of everyone. So, that gives us yet another party member. Now it’s time to leave Lothering.

If you’ve played a Bioware game before, there’s a good chance that you know the basic formula these games go by. After doing a bunch of early content, you’re given a few different choices of where to go next. You can tackle them in any order, and it doesn’t really matter what order you do them in. I have the free DLC that came with the game when it first came out, and since I’ve never done that content before, I decide to go there.

After traversing the world map, we find a merchant who’s trying to get rid of a control rod for a golem. He doesn’t want anything for it, he just gives it to us and directs us to the town where we can find the golem. So, that’s where we head next.

Not too surprisingly, there’s Darkspawn in the village, and we have to take them out. After killing them, we find the golem in the center of town, but there’s not much I can do with him right now. After a bit of exploring, I find some villagers who are captured by the Darkspawn. I free them, and one of them is the son of the golem’s previous owner. He tells me that his daughter is in trouble deeper into the building, which is apparently the golem’s previous owner’s laboratory. We agree to find the daughter in exchange for the words that will awaken the golem.

After a short stroll with a few monster encounters, we enter a strange room with the daughter and a cat. The cat can talk, apparently, and needs help. She’s been trapped down here and needs me to solve a puzzle to free her. If I do, she’ll let the daughter go. The puzzle itself is really annoying. You have to slide panels around, that each shoot fire out a predetermined direction. It’s not unlike the hacking minigame in BioShock, except with fire instead of pipes. After a bit of bumbling, I eventually solve the puzzle and free the cat.

It turns out the cat isn’t a cat at all, but is some kind of demon. She decides she doesn’t want to let the daughter go, because she wants to take over her body instead of being stuck as a cat. We can’t let that happen, so we fight, and win. The daughter is reunited with her father and we get the words to wake up the golem.

The golem’s name is Shale and he’s kind of weird. I usually picture golems as being silent, more tools for their master than anything else, but Shale has a real personality about him. He doesn’t seem to really care for people, but whatever, he can join the team too. Why not?

Next, I head to the Tower of Magi, where I hope to recruit the mages to our cause. Unfortunately, the tower is in lockdown, and the Templars are threatening to destroy the whole thing instead of risking whatever’s in there from getting out. We decide to head in and try to sort everything out before that can happen.

We meet up with Wynne, a mage we had previously run into at Ostagar. She tells us that the tower has been taken over by demon’s a blood mages. So, she joins the party and we head up the tower to fight everything we can find. There’s a lot of people joining the party today.

The tower is fairly boring and monotonous. It’s just a series of rooms that you find bad guys in, kill, and move on. Then you go up to the next floor and do it all over again. Eventually, we came across a demon who was influencing a templar into thinking he was living a happy life. We demanded that she stop, but of course, we end up fighting. I was hoping we’d be able to save the templar, but apparently that’s not possible.

After that, we went up another level and found a demon who threw us into the Fade, the dream-like dimension that the Mages hang out in. Duncan greets us, but it’s pretty clear that it’s not really Duncan. We kill him, or whatever he was. And that’s about where I stopped. I guess we’ll traverse the Fade next week.

I’m still really enjoying Dragon Age: Origins, although my complaints from last week are still here. The game itself simply hasn’t aged very well, and controlling it with an Xbox 360 controller is just not a very pleasant experience. The story continues to entertain however, and that’s enough to keep going.