I don’t usually find myself getting sucked into multiplayer games. There are some obvious exceptions, such as Splatoon, but typically I’d just rather play games by myself. Because of that, it’s always a wonderful surprise when I find a multiplayer game that can hold my attention and refuse to let go. I wasn’t expecting Arms to be the next game to do that, but it just might be.

Nintendo’s new motion-controlled 3D fighting game comes out in a matter of weeks, but you can try the game for a limited time via the Arms Global Testpunch. Like the Splatoon Testfire before it, the Testpunch only runs for certain one hour sessions. I assume this is mostly to stress test the servers, but it also insures that there’s a large pool of players looking for a fight.

Getting everything going is very easy. After a quick tutorial that teaches you how to control the game, your only option in the Testpunch is to play online. You’ll end up in a lobby with several other players, all represented by little head icons of the character they currently have selected. While in the lobby, you can change which character you play as or tap buttons to make your icon emote, but mostly you’re just waiting to be paired up with other players. The game does that on it’s own, grabbing a few players from the lobby and throwing them into different styles of matches.

The game itself is deceptively simple. You old both Joy-Con controllers individually and sideways, so that your thumbs rest on the L and R buttons. Throwing a real life punch will cause your character to throw a punch with the same hand. It’s not unlike the boxing minigame from Wii Sports. Thankfully, there’s a lot more depth than that minigame had to offer. 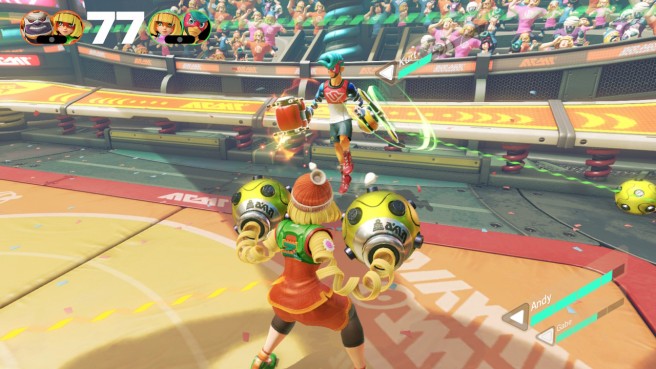 Unlike Wii Sports Boxing, your character is not stationary. You can move around by tilting the Joy-Con in the direction you want to go. This takes a little to get used to, and I found myself accidentally moving forward when I had intended to stay put a little too often. Once you get the hang of it, however, it’s easy and satisfying to move around the stage. For extra mobility, the L button makes you dash, and the R button makes you jump.

The different characters all have unique abilities, which makes the game much more than just who can waggle their controllers the fastest. For example, Ribbon Girl can continuously jump, allowing her to stay in the air and dodge attacks easily. I played with every character available in the Testfire, and found that her abilities fit the way I wanted to play the game best, but I still got beaten many times. Her jumping sounds unfair, but the game is surprisingly well balanced, giving every character some kind of advantage. 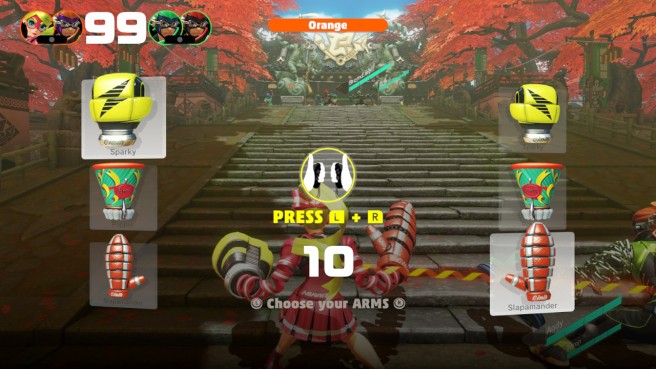 If you made it this far, but had never even heard of the game yet, you might be wondering why it’s called “Arms”. The first, and more obvious reason, is that every character attacks with their super stretchy arms. The other, is that each character can choose from a number of weapons, called “Arms”, to equip before the match starts. These can differ how your attacks work wildly. Some Arms shoot lasers, while others slap your opponents. This gives the game a lot of individuality. You might really like Ribbon Girl, but find that because of the Arms you choose to use, she’s very different from my Ribbon Girl.

There are a few different game modes to play in the Testpunch. There’s a pretty standard one-on-one fight, a free-for-all for up to four players, a two-on-two team battle, and a weird volleyball game. Unfortunately, there’s no way to choose which modes you get, as I said earlier, the game just kind of scoops up some players and throws them into a match. I kind of like how random that can be, but I do hope the option to choose the game mode is in the final retail release.

Fights are pretty much what you expect. Each character has a health bar, and you attack each other using punches and throws until one side wins. The fights themselves are fast-paced and chaotic, especially when there’s four players. I found that I prefer one-on-one fights, as it seemed easier to focus on a real strategy when there’s not a ton going on around you. That being said, adding more players is a ton of fun, it’s just way crazier and harder to keep track of what’s happening.

And then there’s the volleyball mode. In theory, I like this mode a lot. You play on a volleyball court, and you have to smack a giant ball over a net and hope your opponent fails to knock it back. If you preform a throw on the ball, it’ll float in the air for a bit, giving you a chance to spike it. I found myself just waggling the Joy-Con like a bad Wii game a lot more often here. Maybe I’m just bad at it, but it seemed a lot more random than the fights. Also, the vast majority of volleyball games I played ended in a tie, which is kind of weird.

When Arms was first announced, I was not impressed. I thought we were past motion controls. But, as more information got out, I became cautiously optimistic about it. Then, a Nintendo Direct focused on the game came out, and everything in it looked great. Now that I’ve actually played the game, I can’t wait for it to be released. If you want to check it out for yourself before you buy it, there’s two more sessions tomorrow (at the time of this writing), and then some more next weekend. If you’re skeptical about the game, I really recommend giving the Testpunch a shot.

3 thoughts on “Arms Is Unexpectedly Fun”