Square-Enix had it’s first E3 press conference in a long time last year, and I was very excited for it.The biggest news that I could imagine Square bringing to E3 already happened at the Sony conference when they announced Final Fantasy VII Remake. So what could they possibly have up their sleeves to justify putting on a whole press conference themselves? Well, if my memory serves me right, not much. I remember this press conference being super boring. So, with that in mind, let’s conclude my series of looking back at last year’s press conferences by taking another look at Square-Enix and seeing how it holds up.

The conference starts with Square-Enix USA and Europe CEO Phil Rogers welcoming everyone to the show. He discusses how Square has been changing, citing their support of Just Cause and Life is Strange as examples. It’s a pretty standard opening to a press conference. He then introduces Just Cause 3.

Just Cause 3 does look pretty cool here, but I’m not crazy about the way they decided to present it. Instead of a live demo, or even pretending to have a live demo, they showed what was basically an extended trailer complete with some guy doing a voice-over. On one hand, it is pretty nice to just get a big list of features in a bullet-point-like manner, but it does cause some concern. How well does the game actually run? What version of the game are we even looking at? The game is out now, but I haven’t played it, so I can’t really say how things turned out. But I can say that this isn’t the way I want to see games shown at E3.

Next up, Yosuke Saito announces a brand new game. We see a trailer that primarily consists of concept art. After a little while, it’s revealed to be a sequel to Nier, and it is developed by Platinum Games. I’ve never played the first game, so this wasn’t exactly exciting for me personally, and the fact that the trailer showed almost nothing didn’t do anything to get me invested. After the trailer, the director of the game came out to talk a little about it, but doesn’t give too many details. He mainly just talks about how they’ve gotten a lot of requests to make a new Nier, and now they are. Overall, it’s cool to get an announcement, but still left something to be desired.

Immediately following Nier is a trailer for Rise of the Tomb Raider. While this is different than what was shown at the Microsoft conference, doing a second segment on the same game is kind of boring. After the trailer, we see a behind the scenes video that shows the making of Lara Croft’s model. This is kind of cool, but isn’t really what I come to E3 for. So far, this conference is living up to what I remember from last year. It’s just boring.

Up next, we get an announcement for Lara Croft Go, on phones and tablets. It’s a neat looking game, and follows in the footsteps of the successful Hitman Go. It’s nice to get another announcement. Right after, we get a short montage of games, showing Final Fantasy XIV: Heavensward, Life is Strange, and Dragon Quest Heroes. It would have been nice to get more actual information on these games, but that’s alright.

Shinji Hashimoto, the producer of the Kingdom Hearts series takes the stage next and… shows us literally the exact same Final Fantasy VII trailer from the Sony press conference. No new information about the game, no extended scenes, just the same thing. As if that wasn’t boring enough, he then reveals that they’re delaying the PS4 port of the PC version of the original game to Winter. You’re not supposed to bring bad news to E3, especially when it’s a delay of an almost twenty year old game. This is awful. He then says that it’s time to start talking about Kingdom Hearts and to start with a video. As the video starts, you can hear people in the crowd losing their minds at finally seeing some new Kingdom Hearts III footage. Instead, they’re greeted with Kingdom Hearts Unchained X for mobile platforms. For what it’s worth, it looks like a totally okay mobile game. But man, this not how you do this kind of thing.

Thankfully, Hashimoto does finally show some new Kingdom Hearts III footage. I am not a Kingdom Hearts fan, but I know that this game is a very big deal, and to be fair, it actually looks very nice. Everything looks like it’s running smoothly, and there’s some really good detail in the characters and environments. While I have serious doubts that this will be the game to convert me into one of the Kingdom Hearts faithful, I’m not going to deny that it looks great. 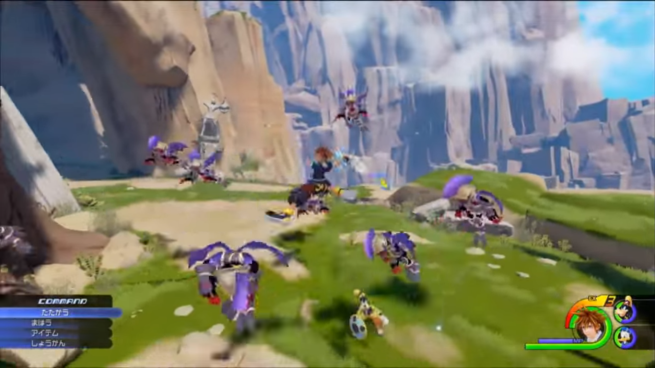 Next, Hashimoto shows us literally the same World of Final Fantasy trailer that was shown at the Sony conference the day before. Like, did they think we’d forget what this stuff looked like? I’m really struggling to see why they felt the need to put on their own conference. So far, Kingdom Hearts III is the only really noteworthy thing shown, and I guarantee you, both Sony and Microsoft would have been delighted to be able to show it during their conferences. The director of World of Final Fantasy comes out to talk very vaguely about the game. Basically, he wants to the game to appeal to everyone. That’s all well and good, but maybe tell us what the game actually is?

After that, we get a look at Hitman. They do the same kind of presentation as they did for Just Cause, an extended trailer with a voice over that goes over the games features. It still doesn’t really do it for me, but at least they are showing something different than what they had shown at the Sony conference, and the game does look neat.

Next, we get a much better reveal. Star Ocean: Integrity and Faithlessness, which had been previously announced for Japan, will be coming to the US and Europe in 2016. Along with the announcement, we get the world premiere of gameplay footage. This is great, this is what I want out of an E3 press conference. Unfortunately, there’s only about fifteen minutes left in the conference, so I suspect we won’t see much more like this.

For the last major section of the conference, Deus Ex: Mankind Divided gets it’s first gameplay reveal. It looks cool, and much like Star Ocean, I have to wonder why they didn’t do this kind of thing for the entire conference. Of course I would prefer to have live gameplay, as opposed to a trailer like they have here, but this is still much better than much of the rest of this show.

Finally, Yosuke Matsuda takes the stage to announce the creation of a new development studio called Tokyo RPG Factory. They are working on a brand new IP, and they show off some concept art. This is kind of cool, but I wish there was more to show. The art doesn’t really give us anything to go off of.

And that’s the conference. This was terrible, and easily my most negative blog post I’ve ever written. Sorry about that. The whole thing just feels so meaningless, like they didn’t have anything that truly justified having a separate conference. Apparently, they must feel the same way, as there isn’t going to be a Square-Enix conference this year.

Well, that concludes my look back at last year’s E3. I hope you enjoyed it as much as I enjoyed writing it. I always rewatch the press conferences in the lead up to E3 to get myself hyped, and it seemed like a good excuse to write some posts on my blog. Stay tuned in a few weeks for my thoughts on this year’s show!

And, if for some reason you want to watch this terrible conference, you can find it right here.